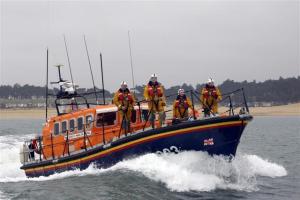 SIX CREW RESCUED FROM STRICKEN VESSEL OFF COAST OF DONEGAL

Six fishermen were rescued off the coast of Inishowen last night when their boat began taking on water.

The RNLI responded to the call off Inishowen.

The crew were on board a commercial crabbing vessel two miles off Dunree when the water began to come on board at about 3.15am.

The crew made an emergency call and two lifeboats from the RNLI based in Buncrana and the rescue helicopter 118 from Sligo rushed to the scene.

Three members of the RNLI boarded the vessel and using a salvage pump, they managed to get the water from the boat and began to tow the vessel.

All the fishermen were wearing lifejackets and had the liferaft ready to be deployed.

A spokesman for the RNLI said there were no injuries.

Once the boat was stabilised, the lifeboat escorted the vessel safely back to shore at Rathmullan where it arrived at seven o’clock this morning.

Following the four hour operation, Mark Barnett, Lough Swilly RNLI Coxswain said: ‘The six fishermen deserve to be commended for their quick actions in the early hours of this morning. They called for help once they got into difficultly and had their life raft ready if needed in an emergency. The boat had taken on a considerable amount of water but thankfully our crew was able to assist and avoid the vessel from sinking and assist the men safely back to shore.’

New organisation to be a voice for...