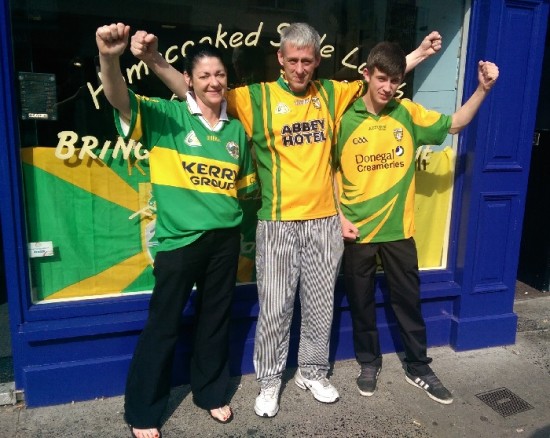 Ballyshannon native Ray Duffy who currently resides in Tralee says ‘he can’t lose’ when Donegal clash with Kerry in the All-Ireland SFC final later this month.

Ray has been living in Kerry for over twenty years after initially planning to stay for just six months.

Ray told traleetoday.ie, “I only planned on staying in Kerry for six months, but I fell in love with the place, and it’s my home now.

“I think Donegal and Kerry are very similar places, their both beautiful places, and the people are very friendly in both counties.

Ray admitted that whatever the outcome in the All-Ireland SFC final on the 21st of September, he’ll be a happy man.

“The way I look at it, I can’t lose. I’ll be happy for my sons and my wife if Kerry win the All-Ireland.

“My oldest son Brad came with me to the 2012 final to see Donegal win. The deal was the next time Kerry were in the All-Ireland I’d go watch Kerry, so I’m as good as my word.

Ray, who owns his own sandwich company Ray’s Loaded Lunches’, admitted he has enjoyed great banter with locals who have visited his café over the last few weeks.

“Kerry fans have been very enjoyable over the last couple of weeks and there have been no hard feelings.

“Once Donegal beat the Dubs everyone was delighted!

“It’s just great that Donegal have been playing well these last few years because there was a long time where we were in doldrums.

Ray said defeating the Dubs in the semi-final will be hard to top, because Donegal were given absolutely no chance.

“I think as far as this year goes, nothing will beat knocking out the Dubs. We were such underdogs, we weren’t given a chance in both the minor and senior games, so to come out with two wins was fantastic.

“Kerry getting to the final is a great boost to the economy here as well. Everyone is cheerful and looking forward to the final, but we could do with a bit more bunting around the place.

Despite living in Kerry for over twenty years, Ray hasn’t changed his colours, when pressed for a prediction he confidently went for a three-point Donegal win.

“If I had to make a prediction, I think Donegal will win by three, but a point will do!