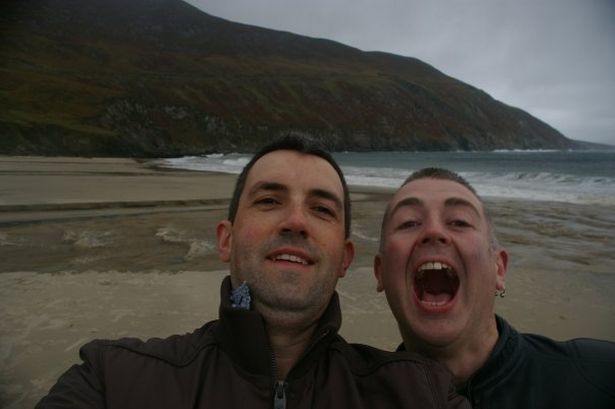 Members of musical ensembles played moving tributes to the son of a Donegal couple who died as he tried to save his partner in a drowning accident in Greece.

Talented John Lynch (45) his partner Kevin Devine (46), were celebrated at a joint funeral Mass in Dublin.

John was the associate principal viola with the RTE National Symphony Orchestra which performed at a Service of Thanksgiving for the couple in St Teresa’s Church on Dublin’s Clarendon Street where family members and friends celebrated the popular couple.

Born in Melbourne to Donegal parents, his remains were cremated yesterday to be returned to the family in Australia.

The bodies of the couple were recovered from the sea off Mavros Molos beach on Kissamos Bay in Crete on August 29th. John went to try to rescue his partner when he got into difficulty swimming.

Mr Doyle was laid to rest yesterday in Calvary Cemetery in his native Drogheda yesterday afternoon.

RTE director general Noel Curran said John would be sorely missed by everyone who knew him.

He added: “John Lynch was a hugely popular member of the RTE National Symphony Orchestra and a most talented musician.

“He will be hugely missed by all in RTE Orchestras, Quartet and Choirs, particularly by those he played with in the National Symphony Orchestra.

“On behalf of all in RTE, I would like to extend my deepest sympathies to John’s family and friends at this very difficult time.”

Mr Lynch, who was born in Melbourne but had dual Irish-Australian citizenship, worked as a freelance musician with both the RTE National Symphony Orchestra and the RTE Concert Orchestra since July 1999.

Before that he played with the Melbourne Symphony Orchestra.