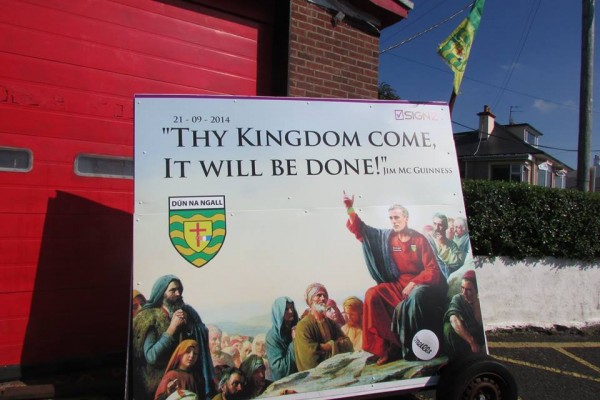 COUNTDOWN TO CROKER: LOCALS IN DUNGLOE BELIEVE JIM HAS A HIGHER CALLING!!

He’s already been dubbed a messiah by the majority of Donegal GAA supporters, and now locals in Dungloe have confirmed their belief that he is God!

The large poster which portrays McGuinness as God is currently located outside the Old Fire Station on the Mill Road in Dungloe.

Donegal face the men from the Kingdom on Sunday week and the poster’s caption captures what the locals in Dungloe think the outcome will be at Croke Park.

“Thy Kingdom Come, It Will Be Done.

The county is awash with colour and excitement ahead of the All-Ireland SFC final with Kerry.

If you have any pictures of great posters showing support for Jim and the boys, or anything related to the Big Match, then send them in to info@donegaldaily.com

COUNTDOWN TO CROKER: LOCALS IN DUNGLOE BELIEVE JIM HAS A HIGHER CALLING!! was last modified: September 11th, 2014 by Mark Forker