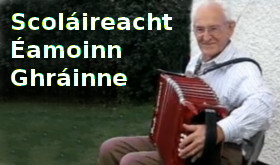 Sean-nós singers are invited to apply for the Scoláireacht Éamoinn Ghráinne, a sean-nós singing scholarship in memory of the late Éamonn ‘Ghráinne’ Mac Ruairí of Tory island and Falcarragh.

Falcarragh-based An tSean Bheairic is offering a scolarship for Sean-nós singers lasting for up to six months.

The purpose of the scolarship is to promothe the singing tradition in the Cloughaneely area.

Éamonn ‘Ghráinne’ Mac Ruairí was a highly-esteemed singer, musician and folklorist who is recognised internationally as one of the finest exponents of the rich musical and cultural heritage of Tory Island as well as being acknowledged as one of the masters of the Donegal sean-nós singing tradition.

The successful applicant will be responsible for organising projects/classes in order to promote the sean-nós singing tradition in Cloughaneely.

The project will take up approximately 7 hours per month with a flexible timetable. The project is due to begin in October.

An allowance of €2000 will be paid to the successful applicant.

If you are interested in the Scolarship please send a CV to: Máire Ní Chasaide, Bainisteoir, An tSean Bheairic, An Fál Carrach, Co. Dhún na nGall.