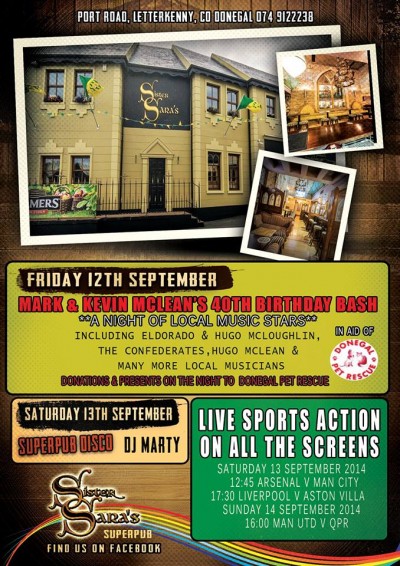 Tomorrow night, we’ve got Mark and Kevin McLean’s 40th birthday bash, which promises to be a terrific night’s entertainment.

Music will be performed by Eldorado, Hugo McLaughlin, The Confederates and Hugo McLean.

On Saturday it’s the super-pub disco with our resident DJ Marty Curran, he’ll lay all your club and chart favourites to get you in the party mood.

On Sunday you can watch all the premiership action on any of the large HD Plasma TV’s located throughout the bar.

So if you’re heading out this weekend, make sure and drop in to Letterkenny’s No.1 super-pub Sister Sara’s.