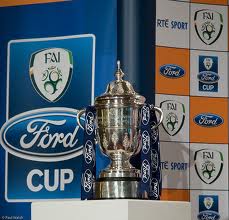 AVONDALE STAND BETWEEN HARPS AND A PLACE IN CUP SEMI-FINAL

With their hopes of finishing in the play-off spots now gone, Finn Harps’ season now rests on progression in the FAI Cup and on Sunday they face a trip to Intermediate Cup holders Avondale United in Cork (kick-off 2.00pm).

Harps have booked a place in the FAI Cup quarter finals!

While Avondale may be a non-League of Ireland side, Harps manager Ollie Horgan is warning his players and the clubs supporters that Sunday’s opponents are a formidable side.

“I know Avondale well over the years,” said Horgan. “I had many battles with them while with Fanad United. I think we played them in two quarter-finals and one semi-final of the Intermediate cup with Avondale winning on all three occasions.

“They have won the last four intermediate Cups – an incredible achievement – with a group of very experienced players,” continued Horgan.

“They are physically very strong but have players of serious ability in all areas of the field from goalkeeper O’Leary through to Danny Long up front. They are an extremely well run club, with past players coming back to help out, with Dave O’Keefe now taking over in charge,” he said.

Harps aren’t going into the game in the best of form. Their 2-1 victory over Wexford Youths last month in the previous round of the Cup brought their run of results to just one defeat in fifteen games.

But, since then, Harps have recorded back-to-back defeats against the bottom two sides in the First Division with Shamrock Rovers ‘B’ and Cobh Ramblers both winning on 1-0 scorelines over Horgan’s Harps in the last fortnight.

“No time is a good time to go on a bad run,” says Horgan. “While we had plenty of possession in both games, we didn’t score in either with poor finishing and good defending from the opposition.

“We started well on Saturday down in Cobh but it was similar to the previous week where we had a few good chances but didn’t take them,” he said. “When Cobh scored a good goal from a free kick, we struggled to break them down, they defended very well and could have scored a second on the break.”

Horgan will have to plan for Sunday’s trip to Avondale without the suspended duo of Damien McNulty and Shaun McCarron. Kevin McHugh hasn’t recovered from injury and also misses out while doubts remain over the fitness of Packie Mailey.

Having waited ten years to appear in the last eight of the competition, Harps will now do so far the second time in successive seasons having reached this stage of the competition last year also. Then, after a 1-1 draw against Drogheda United at Finn Park. Harps lost 2-0 in the replay at United Park.

A victory on Sunday would see Harps reach the semi-finals of the Cup for just the sixth time in their history with the last of these appearances coming fifteen years ago with a Terryland Park meeting with Galway United.

Should Sunday’s game in Avondale Park finish in a draw, a replay will take place at Finn Park next Wednesday night (17th September) with a 7.45pm kick-off.

AVONDALE STAND BETWEEN HARPS AND A PLACE IN CUP SEMI-FINAL was last modified: September 12th, 2014 by Stephen Maguire