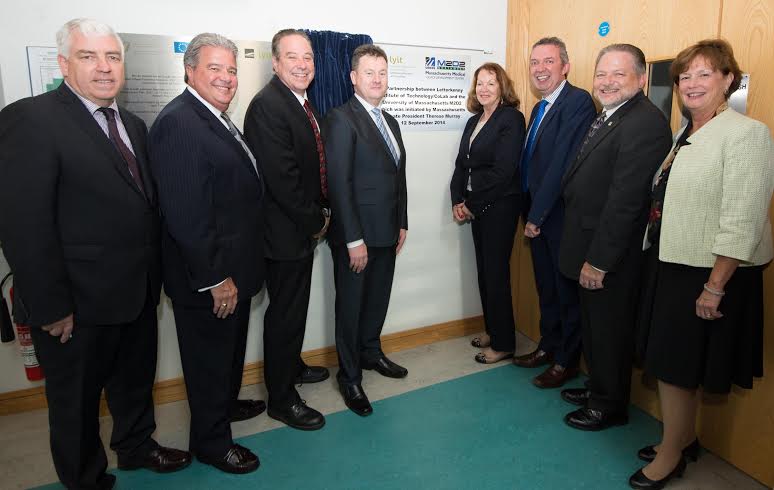 The successful medical device incubator will now hold incubator space at the Letterkenny Institute of Technology (LYIT) and the Clinical Transitional Research and Innovation Centre (C-TRIC).

The opening of international medical device incubator space is the direct result of previous trade missions to Northern Ireland and Ireland led by President Murray.

“This exciting collaboration will offer assistance to Massachusetts-based companies looking to break into the European market while also attracting European companies that want to launch clinical trials in Massachusetts. Our shared goal is to create an environment where research, innovation and commercialization can all take place and this is a big step forward for innovators and entrepreneurs in Massachusetts and beyond.”

Founded in 2008, M2D2 is a joint UMass Lowell and UMass Worcester initiative designed to accelerate the development and launch of new medical device companies. M2D2 provides business development counseling, engineering and prototype development support, as well as clinical and regulatory path guidance, and has assisted more than 100 start-up companies and entrepreneurs since its inception.

“UMass serves a vital role as an economic engine for Massachusetts with a statewide annual economic impact in excess of $6 billion,” University of Massachusetts President Robert Caret said.

“Our focus on entrepreneurship and the development of new products and services provides us with a unique opportunity to contribute the talent and resources of the university to startups, here and abroad, that will lead to their success and sustainable economic development for Massachusetts.”

“I want to congratulate everyone involved in launching this initiative,” UMass Lowell Executive Vice Chancellor Jacqueline Moloney said. “Given M2D2’s track record of success and the potential benefits that such collaboration offers, for years to come.”

Letterkenny Institute of Technology President Paul Hannigan, welcomed M2D2 to LYIT, “We are proud to be part of this unique initiative and look forward to a future successful partnership. This collaboration lays the foundations using a proven formula for medical companies to thrive and develop. Of course, it offers a corridor for medical device companies to connect to the US and for US companies to enter the European market.

“This partnership presents exciting possibilities for the commercialization of new ideas which will drive economic growth, knowledge exchange, research and student experience. We can now say categorically that the North West is a hub for medical device innovation.”

The partnership between UMass, Northern Ireland and Ireland will also include a monthly programming exchange between the universities and opportunities for research by faculty and graduate students researchers and shared grants.