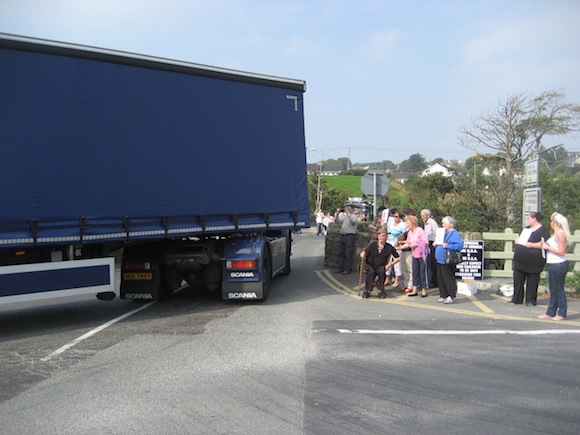 OUTRAGED RESIDENTS TAKE TO THE STREETS OVER ‘KILLER’ BRIDGE

A lorry tries to navigate around Cockhill Bridge in Buncrana as protestors look on.

Outraged residents have staged another protest at Cockhill Bridge in Buncrana to highlight the dangers of the structure.

The protestors say it is only a matter of time before someone is seriously injured or worse on the bridge which has no pedestrian access.

They say a petition signed by 2,500 locals has already been to the council, but nothing has been done to date.

This man makes his feelings about the bridge known in writing.

The protestors commissioned a special cameraman to take an aerial view of the situation which highlights the dangers for families in the area.

A spokesman said “What has to happen before the council realise that this is a death trap? People in Buncrana are fed up but still outraged that we are being ignored.

“We will continue to protest and make our feelings known until this bridge is upgraded or replaced.”

The large crowd which turned out at Cockhill Bridge yesterday.