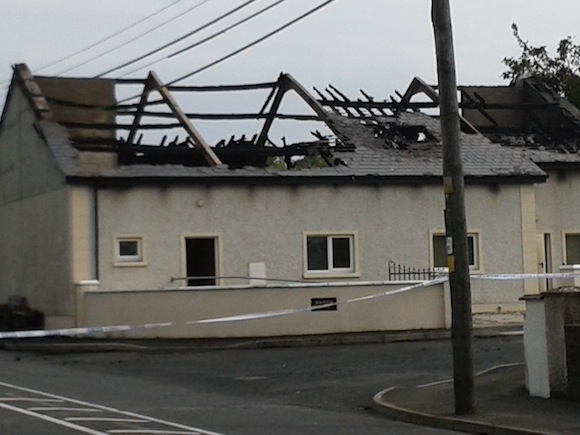 Gardai have confirmed that a fire which destroyed an Orange Hall in Newtowncunningham was started deliberately.

The fire was first spotted at 7am on Sunday morning.

The roof of the building and much of its contents was completely destroyed in the blaze.

The hall had only been completely refurbished last year and was used up until last friday when a party party had taken place in te building which is located on the village’s Main Street.

There was a previous arson attack on the hall in 2010.

Gardai have now appealed to locals who may have seen anything suspicious to contact them.

Responding to confirmation from An Garda Síochana that the fire that devastated Newtowncunningham Orange Hall in County Donegal was an arson attack local Sinn Féin TD Padraig Mac Lochlainn described it as an attack on the entire community.

Speaking after inspecting the damage at the hall with members of the local Orange and Protestant community Deputy Mac Lochlainn said those responsible for this attack represent nobody but themselves.

“Anybody with any information relating to this incident should bring it immediately to An Garda Síochana.

“I sincerely hope that those responsible will be brought to justice.

“I also want to convey the solidarity of the entire community in Donegal with the minority Protestant community at this time. I have no doubt that that community will unite together and rebuild the hall.”