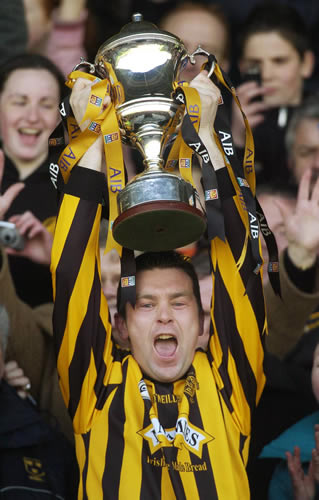 Oisin McConville is joining our illustrious panel of GAA legends. The show is at 8pm tomorrow, WEDNESDAY, at the Mount Errigal Hotel

THE Donegal Daily ‘Going GAA GAA for Sam’ night at the Mount Errigal Hotel has another great name to add to our star-studded panel – gaelic football legend Oisin McConville.

Now Oisin has confirmed he will be joining the panel with MC Charlie Collins and members of the audience putting the questions in a night being organised in conjunction with St Eunan’s GAA Club ahead of this Sunday’s All-Ireland Final clash between Donegal and Kerry.

The former footballer had an astonishing career.

He won an All-Ireland Senior Football Championship medal, seven Ulster Championships and a National League title with Armagh, picking up two All Star awards along the way.

The room at the Mount Errigal was being set up today, with tables of ten in the ballroom.

Entry is just 10 euro for adults, 5 euro for children and 20 euro for a family of 2 adults and up to 3 children.

A Donation to the county Players Fund will be made.

Donegal TV will also be there to capture the night’s events.

Doors open at 7.30pm with the show due to start at 8pm sharp with music and entertainment during the interval.

There will also be video highlights of Donegal’s year so far as Jim McGuinness and his team prepare for Sunday’s Croke Park final.

It’s a ‘must’ night for GAA fans – payment is at the door.

ALL STAR OISIN McCONVILLE SET TO JOIN OUR ‘UP FOR THE MATCH’ NIGHT was last modified: September 17th, 2014 by John2