Animals owners across Donegal have been urged to use common sense if painting animals in the county colours in the lead-up to the All-Ireland Final. 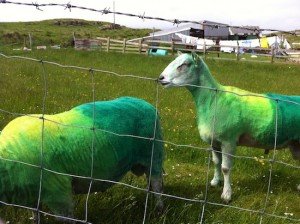 Traditionally many animals including sheep have been coloured on the hillsides of Donegal.

But ISPCA spokesman Conor Dowling asked people not to cause animals any unwanted distress.

“We don’t want to be killjoys but we would ask people to exercise common sense if painting animals.

“Some animals are most used to it than others but we would always ask people not to cause any animal unwarranted distress.

“We would also ask them to ensure whatever colouring they are using that it is not dangerous to the animal,” he said.