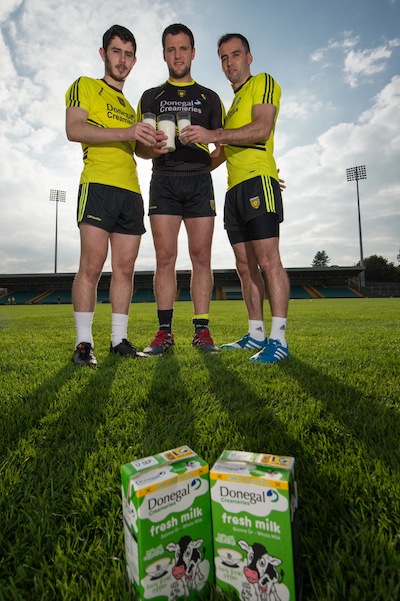 Donegal stars Ryan McHugh, Michael Murphy and Karl Lacey getting fueled up for the big game!

LAST CHANCE TO ENTER: Tickets for the All-Ireland Final will be like gold-dust but Donegal Daily has TWO free tickets to give to one lucky reader.

The Donegal GAA team has been lucky to have a loyal sponsor like Donegal Creameries in recent years.

Courtesy of the Donegal teams’ main sponsor we have two tickets to give away.

And the even better news is that the competition is completely FREE – no expensive textlines or silly requests for a like on Facebook!

Simply answer this simple question – ‘Name the cow that is used on the Donegal Creameries fresh milk packs?’

You can email your answer with your name, address and mobile phone number to dailydonegal@gmail.com.

Entry to the competition closes at 3pm next Wednesday.

The winner will be announced at Donegal Daily’s Night of The Stars at the Mount Errigal Hotel tomorrow night, Wednesday. MC Charlie Collins will be ringing the winner by phone so make sure you have your mobile charged up!

The tickets will be presented by Donegal Creameries on Thursday to the lucky winner.

LAST CHANCE TO WIN 2 TICKETS TO THE ALL IRELAND FINAL – WITH DONEGAL DAILY AND DONEGAL CREAMERIES was last modified: September 16th, 2014 by John2