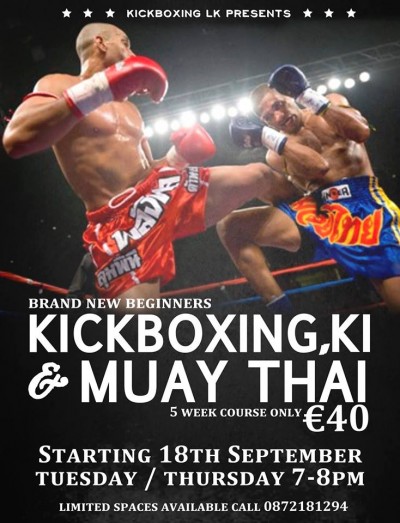 KICKBOXING LETTERKENNY IS ‘KICKING’ UP A STORM

Kickboxing LK has been kicking up a storm on the European and Irish circuit in the last few weeks.

It all started on August 16th with coach Tommy “The Ghost” Mc Cafferty exploding onto the European mixed martial arts scene with a highlight reel knockout of Scotland’s Dean Reilly on his Cage Warriors debut.

The fight was touted as a battle of the two best strikers in the European featherweight division, and fans got their money’s worth with a see-saw battle in the first round.

Mc Cafferty came out in the second and took control, landing some brutal leg kicks to take away Reilly’s mobility, that was present in the first round.

At 56 seconds into the 2nd round Mc Cafferty landed a switch step right hand which dropped Reilly hard to the canvas before mc cafferty moved in for the finish in what was described by the commentator as an “absolutely unbelievable knockout”.

Check it out here http://www.youtube.com/watch?v=9VpzkBGhQrc

Kickboxing LK isn’t just about the competitive side of the sport, and this was shown when Newtowncunningham’s own John Hannigan became the first black belt under the guidance of Tommy Mc Cafferty to fight.

John had trained firstly in the junior class before making his way to the senior classes and with a lot of hard work and extreme dedication after six and half years of training he got the honour of becoming kickboxing LK’s first black belt on September 4th.

On Saturday night, Letterkenny’s own Brian “The running man” Crossan took to the ring on the undercard of a WKU professional world title fight to challenge for the WKU Irish title.

Brian who is currently the WKA Irish champion was looking to unify the two Irish titles to cement himself as Ireland’s no.1 super middleweight full contact kick-boxer.

He entered the ring on Saturday night to take on the hometown boy and crowd favourite Michael Mc Crossan in what was set to be a battle of two big hitters.

In the first couple of exchanges both men looked determined to put an early stamp of authority on the bout with both having some success in the early exchanges in what was an even first round.

The Letterkenny man started to come strong in the second round landing some big combinations ending with some thundering kicks to his opponents body.

It was becoming evident as the round went on that these were starting to add up as Brian Crossan started to up the ante narrowly missing with a spinning hook kick.

In the third round, Brian started to go on an all out attack landing some big punches and kicks but Michael Mc Crossan was in no way out of the fighting firing back with some heavy hands of his own.

As the round went on Brian Crossan started to take control using push kicks and side kicks to stop Michael’s attacks and to set up his own combinations.

As the third round came to a close it was looking like the Letterkenny man was still fresh and when the fourth round started this became very clear as Brian Crossan went on all out attack landing kick after kick to the mid-rift of his opponent and following up with some heavy handed combinations.

Halfway through the fourth, Brian landed a sharp sidekick which seem to hurt his opponent and once Brian seen the change on his opponents face he followed up with and cracking right leg his forced his opponent to the canvas.

Referee Stephen McFarlane started the count but as the count came to the end it was obvious that Brian’s opponent wasn’t going to make it up for the count as he was counted out.

As the MC announced the result Brian’s strong following could be heard loudly echoing through the venue in celebration of what was a huge victory for the Lurgybrack man.

Brian who is known for his high levels of fitness on the running circuits as well isn’t one to sit about and rest on his glory and is now preparing for his K-1 debut in Belfast in two weeks time.

Kickboxing LK is known as the premier striking gym in the North-West but this didn’t stop head-coach Tommy Mc Cafferty from picking up a bronze medal in the Irish BJJ leagues the following morning in the middleweight blue belt category narrowly missing out on the final.

Tommy says the clubs key to success is that they keep the training fun and enjoyable.

There is no room for ego in the club and everyone is there to help make each other better and support each other in their goals.

Whether that be to lose weight, learn self defence, work their way to black belt or to actually enter the ring at some stage in any of the disciplines taught at the club from kickboxing to k-1 to Muay Thai.

If you’re interested in learning some kickboxing or Muay Thai or even just to lose some weight, why not try out our new beginners course starting this Thursday at 7:00 at the Aura leisure centre, which will take place twice a week for five weeks, the price for the course is €40.

KICKBOXING LETTERKENNY IS ‘KICKING’ UP A STORM was last modified: September 16th, 2014 by Mark Forker