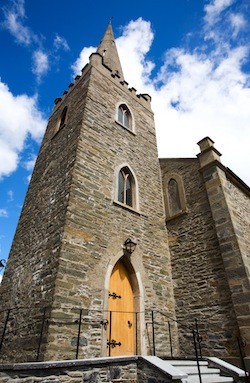 Gaudium Chamber Choir is proud to be performing as part of Culture Night 2014 this Friday in the beautiful setting of the newly-refurbished Conwal Church of Ireland, Letterkenny.

The performance features the young soprano, Riana Lynch, in a program that has a strong Irish element and centres around the important themes of love, death and life.

The program will include Stanford’s well-loved The Blue Bird, Michael McGlynn’s arrangement of Siúil Arún for Anúna, plus the first of Hubert Parry’s beautiful Songs of Farewell.

There will also be pieces by Sullivan, Brahms, Bach, Buxtehude and Vivaldi, along with arrangements of other Irish traditional songs.

Gaudium (“Joy”) was formed last year to give more experienced singers the chance to enjoy performing more challenging music in a variety of contexts.

Based in the Letterkenny area, its members come from around the county as well as Derry and Fermanagh.

It has a growing repertoire of a wide variety of both sacred and non-religious pieces, and as well as concerts it has provided high-quality music for enthusiastically-received choral liturgies featuring music from among the best of the treasure-trove of gems written for these across the centuries.