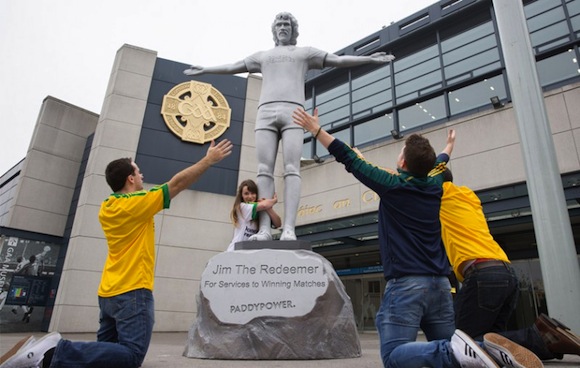 JIM ‘THE REDEEMER’ GETS HIS OWN STATUE OUTSIDE CROKE PARK!

The statue erected to Jim McGuinness outside Croke Park today!

A lot of people in Donegal think Jim McGuinness can perform miracles.

But now Ireland’s favourite bookmaker has given him almost God-like treatment.

As the countdown to the Ireland goes into overdrive, Paddy Power honoured the Glenties man McGuinness with the unveiling of Jim The Redeemer statue at Croke Park.

The statue is a throwback to his playing days when McGuinness bore a striking resemblance to Jesus Christ.

It comes complete with his then-trademark goatee, long locks, manly bulge and a torso embossed with a retro Donegal jersey.

Standing 12 feet tall, the structure also references the county team’s unofficial anthem ‘Jimmy’s winning matches!’ with the base emblazoned with “Jim The Redeemer – For Services To Winning Matches”.

Donegal find themselves in the final despite being written off by both the bookies and the pundits throughout the year.

Starting the championship at 25/1 the men from the hills entered their semi-final against Dublin as 6/1 outsiders to reach the final before vanquishing Jim Gavin’s men, resulting in our biggest-ever loss in a single GAA game.

Paddy Power said “Now that Jim McGuinness has his very own statue it’s not just looks and god-like powers that he has in common with the son of the almighty. Jesus Christ was a great lad but I doubt he’d have managed to get Donegal to two All-Ireland finals and their fans will be hoping that Jim has one more miracle in his back pocket to ensure his sainthood in the hills.”

• The Statue is made of polystyrene then filled and sanded before application of an F/R polyurethane hard-coat.

• The height of the figure is about 2.5 metres and the base is nearly 1 metre high.

• It was made in one week with one main sculptor and an assistant.

JIM ‘THE REDEEMER’ GETS HIS OWN STATUE OUTSIDE CROKE PARK! was last modified: September 19th, 2014 by Stephen Maguire