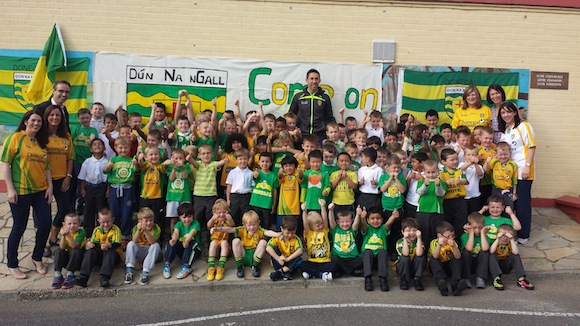 Rory at back with principal Paraig Canon and other teachers alongside their pupils.

The GAA has gone global in one Co Donegal school.

And it’s in no small part to a certain teacher who happens to be a star player on the team which plays Kerry in the All-Ireland Final this Sunday.

Pupils from no less than nine different countries including Poland, Lithuania, Scotland, Hungary, Nigeria, Korea, the UK, Ireland and The Philippines play gaelic football each day at Scoil Cholmcille in Letterkenny.

And they couldn’t get a better coach than a certain muinteoir Rory Kavanagh who hopes to help Donegal lift the Sam Maguire this Sunday.

Principal of Scoil Cholmcille, Paraig Cannon says Rory is the modern-day Finn McCool and is loved by everyone at the school.

“Rory is so tall but gets on so well with all the pupils and is such a hands-on teacher.

“It is great for the children to be able to immersed in Irish culture from such a young age and what better way than through gaelic games.

“He reminds me of a modern-day Finn McCool because he is so tall and all the kids literally look up to him,” said Mr Cannon.

“It’s great for kids across Donegal that we are in the All-Ireland Final but to have a teacher in the school who is on the team is even more special.

“Rory is forever giving up his time for the children and he is a credit to his family, his school and his county,” he added.

The only downside of all the celebrations is that, despite having a star player on the staff, Principal Canon still doesn’t have a ticket for the game.

“I may have to resort to more devious means,” he laughed.

THE GAA GOES GLOBAL IN DONEGAL SCHOOL THANKS TO THEIR OWN FINN McCOOL was last modified: September 19th, 2014 by Stephen Maguire