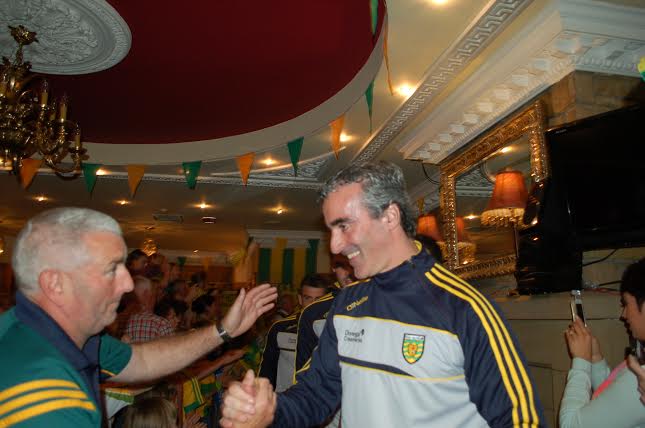 COUNTDOWN TO CROKER: PLAYERS GIVEN A ROUSING SEND-OFF FROM THE ABBEY HOTEL

BY PAUL O’SULLIVAN: About a thousand people turned up outside the Abbey Hotel Donegal Town this afternoon to see off both the senior and minor Donegal GAA teams on their journey to Dublin for tomorrow’s All Ireland Finals.

There were nearly as many inside the hotel as outside. The senior team arrived shortly before 12 for their traditional lunch and pep talk.

The Ballroom was in complete lock down as Jim McGuinness gave the the panel their last pep talk before leaving Donegal soil.

Nothing was left to chance, the room was forensically searched by hotel management and staff insuring strict privacy.

“We even scanned the trees directly across the river from the hotel on the Bank Walk for any Kerry spies and can assure the people of Donegal none were found.”

COUNTDOWN TO CROKER: PLAYERS GIVEN A ROUSING SEND-OFF FROM THE ABBEY HOTEL was last modified: September 21st, 2014 by John2