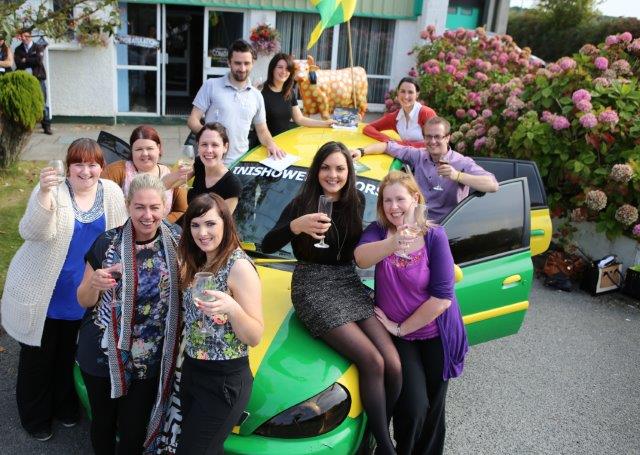 James Bradley, with the winning ticket, and his fellow winners.

The holder of the lotto ticket which scooped a whopping €5M for a Donegal call-centre syndicate has revealed his co-workers refused to believe they had won the fortune.

James Bradley is renowned as a practical joker.

So when he tried to telephone his co-workers at Forward Emphasis International in Malin Head to say they had won Wednesday night’s lotto, nobody believed him.

In fact, it took him a number of hours to convince the others they were in the money and had scooped €375,000 each.

James, 28, revealed “I started ringing around the others in the syndicate to tell them the good news. As you can imagine, I was on a complete high and couldn’t wait to break the news to them.

“However, none of them would believe me, they were just like, ‘aye good man Jimmy, do you think we were born yesterday’!

It was only after three hours of persistent calls and texts, that some of the members actually started to believe him.

Fellow winner Anna McKinney said James is renowned as a the joker in the pack so everyone thought it was just another one of his jokes.

She said “At the start I was just like yeah sure Jimmy, he’s always playing pranks and I was having none of it.

“But after a good few hours, he was so insistent and persistent with the calls, that I was like right this isn’t funny anymore is he actually serious?

“Then when I realised he was, I was just gobsmacked and absolutely over the moon.”

Bradley was glad when his colleagues started to take him serious, so he could the celebrations underway.

“I was getting annoyed when they wouldn’t believe me. I was repeating myself over and over again, suppose when you’re always playing pranks that reputation as a messer sticks.

“I was like the boy who cried wolf, thankfully they believed me and then we can start celebrating properly.”

The syndicate eventually met up for breakfast in the Inishowen town of Carndonagh on Thursday morning to toast their luck.

They had to settle for tea instead of champagne however as nowhere was open to buy some bubbly.

Although most of the ‘lucky 13’ feel blessed, Maria Doherty feels even luckier than most.

She only started at the company on Monday last and only contributed to the lotto syndicate because she had some change in her pocket.

Maria, 21, hasn’t even received her first pay cheque from the Malin-Head based company.

“I’m just so glad I had some change in my pocket and it was really nice to be asked to become part of the syndicate.

“I can’t tell you how happy I am that I did,” laughed Maria.

Many of the group are now planning holidays and spending sprees while others also want to wipe out their mortgages.