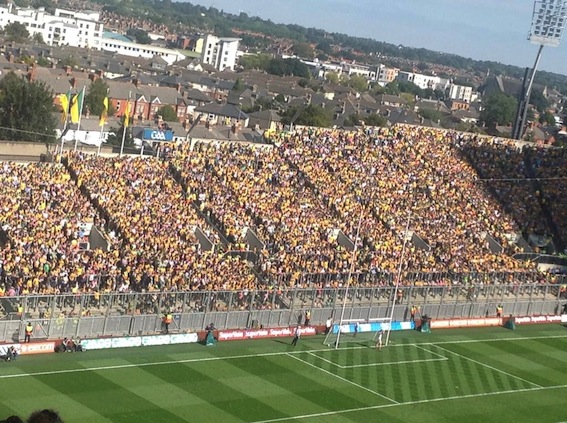 Donegal fans on Hill 16 for today’s double header against Kerry.

Donegal have failed to win their first All-Ireland minor football title despite a brave fight against Kerry in today’s final at Croke Park.

Declan Bonner’s young side did themselves and their county proud giving the hot favourites a real scare when losing out by four points.

Trailing by six points half way through the second half, Donegal roared back to within a point and were unlucky not to go in front, Kerry goalkeeper Ryan pulling off several brilliant saves to maintain his side’s narrow lead.

Donegal, making their first ever appearance in a minor final, took an early lead against the favourites when Brennan tapped over the first point of the game.

The Kingdom hit back with two points to lead by a single score after five minutes but Declan Bonner’s youngsters bounced back and led by 0-03 to 0-02 when McGonagle put over the bar from 50 metres.

After keeper Shane Ryan reacted brilliantly to deny a Donegal goal, Kerry put over two unanswered points to lead by 0-05 to 0-03 after 15 minutes.

Both sides exchanged points to keep two between at the break.

Dublin started the second half the much brighter and raced into a four point with 35 minutes gone.

After Jamie Brennan struck a Kerry post, the Kingdom broke and regained their four point lead.

Harley reduced the deficit to  two points a minute later.

Ryan produced a brilliant save to prevent a Donegal goal as Kerry started to crack under consistent  pressure.

A brilliant long distance free from Lorcan Connor made a one point game with six minutes to go.

However, Kerry settled themselves in the dying minutes to put over three unanswered points to put them four ahead.

Ryan pulled off another brilliant save in the dying seconds.

At the final whistle,Declan Bonner’s youngsters were given a standing ovation by the thousands of Donegal fans.

Now, it’s over the Jim McGuinness and his senior side. Come on, Donegal !!!