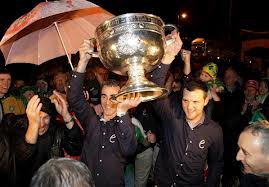 THOUSANDS EXPECTED IN THE DIAMOND FOR RETURN OF GALLANT DONEGAL TEAMS

Thousands of people are set to throng The Diamond in Donegal Town tonight when the Donegal Minor and Senior teams return home.

Jim McGuinness and Michael Murphy arriving in The Diamond in 2012 with the Sam Maguire cup.

Both teams will get a huge welcome home despite being beaten in their respective All-Ireland Final games at Croke Park yesterday.

Traffic arrangements are now being put in place for the homecoming.

The senior team will initially arrive in Pettigo at 6.45pm and stay until 7.30pm while the minors will arrive in Ballyshannon at 7.30pm and arrive in Donegal Town at 8pm.

There will be live entertainment in The Diamond from around 7pm to entertain the crowds.

But with the current dry weather spell of recent days, a huge crowd is expected in The Diamond.

Ed Byrne, PRO of the Donegal County Board, said he hopes fans come out and support both teams whom he said had done remarkably well.

He added that he hopes that the teams will arrive at The Diamond at the specified times.

THOUSANDS EXPECTED IN THE DIAMOND FOR RETURN OF GALLANT DONEGAL TEAMS was last modified: September 22nd, 2014 by Stephen Maguire