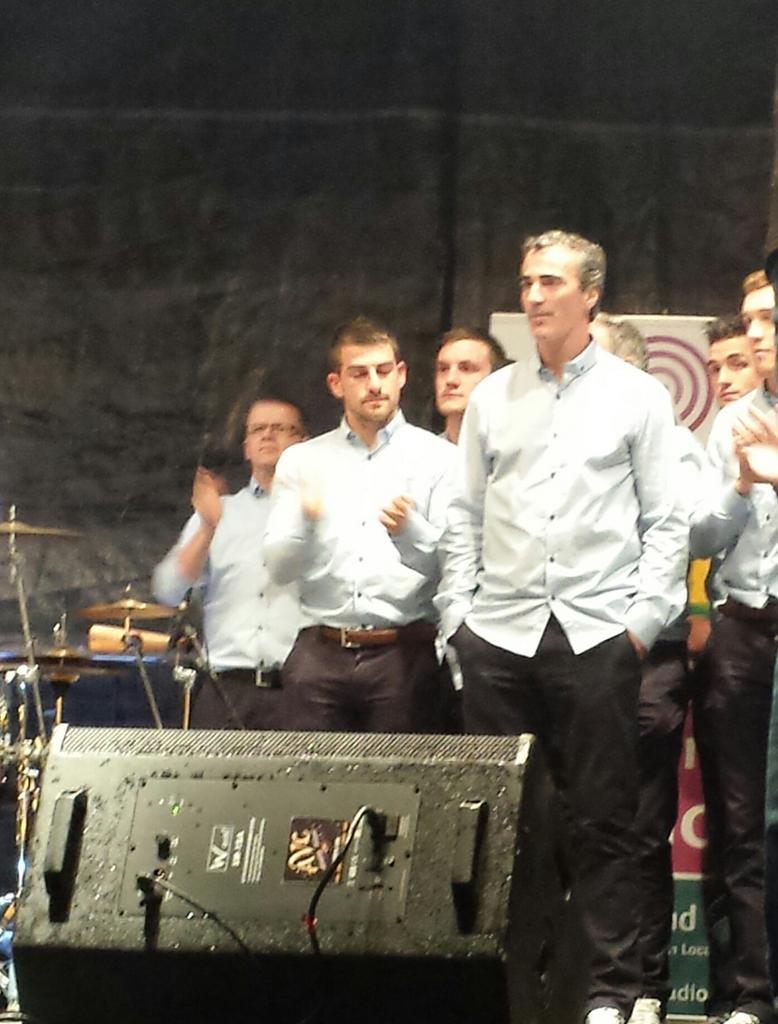 Some of the huge crowd in the Diamond tonight. Pic courtesy of Donegal Bay Waterbus.

One very important passenger may have been missing from their entourage as Donegal GAA manager Jim McGuinness and his team returned home tonight.

But even without the Sam Maguire cup, an estimated crowd of more than 5,000 people thronged The Diamond in Donegal Town to welcome home the county’s senior and minor teams.

Despite a double-defeat to Kerry in their respective All-Ireland finals, Donegal fans gave them a boisterous welcome home from their weekend adventure in Croke Park.

Fans began gathering around the streets from 5pm in anticipation of the teams’ arrival.

Michael Murphy is inconsolable at Croke Park as he is hugged by that man Donaghey. Pic by Brid Sweeney.

But despite failing to win their county’s third ever senior All-Ireland title, the Donegal team were met by a huge roar when the finally arrived in The Diamond just after 9pm.

Many fans, many still wearing their Donegal jerseys, had made up new posters with new logos welcoming the team home.

One of Donegal’s other famous sons Daniel O’Donnell, a huge GAA fan, entertained the crowds.

He revealed he told a group of Kerry fans who jibed him about their win “You are longer without Sam than we are.”

He also said that Jim McGuinness and his team had brought a light to Donegal when almost all other lights were out due to emigration and other things.

“We would love to see you staying but if your decision is otherwise then I want to thank you from the bottom of my heart for al you have done for us,” he said.

Jim McGuinness addressed the crowd and admitted this was a difficult night for himself and the players.

“We didn’t expect such a homecoming tonight and it has been very, very humbling to come back after having lost an All Ireland final. I’d be lying if I said there is not a lot of pain and emotion on this stage. We wanted more than anything else in the world to bring the Sam Maguire back to Donegal.

“I have been working with teams since I was 16 years of age. That’s; 25 years but these people behind me are the best people , not talk about players, that I have ever worked with.

“What they have given over last number of years had been second to none. We push them as hard as we can and led by an unbelievable I captain in Michael Murphy, every night they turn up and that is the special part for me. It is testimony to the clubs and the families and to themselves,” he said.

And he added “We have done 128 training sessions outside of gym and every night they want to work and learn and improve and as a coach that is the holy grail. That’s a very special thing and that’s why this team have delivered three Ulster championships and an All-Ireland in four years.”

McGuinness, who is finishing his fourth year as team manager, said he will now take time to reflect on his position away from the emotion of the All-Ireland Final.

“WE WANTED MORE THAN ANYTHING ELSE IN THE WORLD TO BRING BACK SAM” – McGUINNESS was last modified: September 23rd, 2014 by Stephen Maguire