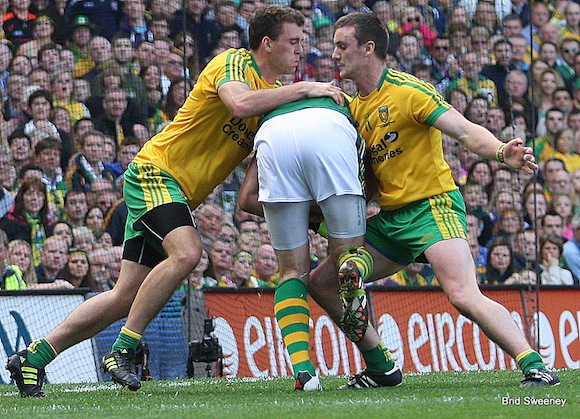 McGee and McLoone form a human barrier to keep that mountain man Donaghey out. Pic by Brid Sweeney.

It was supposed to be our greatest day but it couldn’t have turned out any worse. A devastating double defeat for Donegal, with both minors and seniors falling short and it is not a nice feeling waking up the day after an All-Ireland Final defeat.

Leading into the game, Donegal seemed to hold all of the aces and in truth if the teams were taking to the field every day this week, you’d back Donegal every time. On the day Kerry were better – but every other day Donegal would be better. Kerry were depending on keeping the game tight and hoping that their opponents would under-perform and that is exactly what happened.

The verve and brio usually associated with the team, illustrated so perfectly in the semi final, was absent and the players seemed nervy, possibly struggling to cope with the expectation heaped upon them. Jim McGuinness though is the master at preparing for such situations, getting the heads right, so for his Donegal team to be so out of sorts is unusual. For it to happen on the biggest day of the year is tragic as the team will know today as they make the long trip home that they left a second title behind them.

Kerry did what they had to do in that they retained a defensive shape as much as they could but in truth they didn’t out-think or outfox Donegal. The Kingdom’s midfield pair of David Moran and Anthony Maher were both excellent and had a great battle with Neil Gallagher and Rory Kavanagh, who were two of the team’s better performers, especially in the first half. Gallagher had another fine match to cement his All Star selection but was unable to dominant aerially from kick outs such was the pressure exerted by the Kerry duo.

Leo McLoone was fantastic throughout, incessantly running at the opposition defence looking for gaps. Leo is often the player who makes way in the third quarter but that it was Ryan McHugh and not the Glenties man who made way at this juncture of the game spoke volumes of his display.

Of course it says plenty about McHugh as well. The young starlets of this team, who have brought so much to the fray this year – McHugh, Odhran MacNiallais and Darach O’Connor – all started yesterday but were all taken off. They have added so much freshness and skill to proceedings this year that without any of them playing like they can, the team’s capabilities were greatly reduced.

Going into the game, the talk was of Kerry’s primary threats of James O’Donoghue and Kieran Donaghy. O’Donoghue played most of his football out the field in a deeper role and while he saw a lot of the ball, by his own standards his impact was minimal. If someone had said during the week that O’Donoghue would be kept scoreless, many would have felt Kerry wouldn’t have had a prayer.

Donaghy made a nuisance of himself on the edge of the square and won some good possession. At times Gallagher was brought back to double up on him along with his marker Eamon McGee and overall his threat was handled well.

Despite a horrendous start, Donegal were calm and composed and slowly but surely grinded Kerry down in the first half. It was fascinating to watch as the system clicked into action; there was a strange subdued atmosphere in Croke Park for much of the first half – there seemed a certain inevitability to every attack and with Donegal level by half time things looked fairly good although there were a few too many chances wasted.

One feature of play yesterday was the amount of times Donegal players ran into groups of Kerrymen without support runners in tow; players were isolated as the ball was stripped off them and gobbled up by hungry defenders.

The second half followed suit; Donegal not playing particularly well but not panicking and happy knowing that their game plan would see them home.

Then came the match and season defining moment.

However bad the rest of us feel today, it will be nothing compared to Paul Durcan. The big man is one of the key reasons why Donegal made it this fair in the first place and has every chance of collecting a second All Star award next month.

With the game delicately poised, Durcan weighed up his options to set Donegal on the attack again. Whether the clash of jersey colours played its part in the next few seconds or the strong sunlight shining into the Hill was a factor, either way the ball ended up in the grateful hands of Donaghy who finished simply, although his task was made easier with the big keeper going to ground too quickly.

It was a horrible moment for Papa. Every player at every level, indeed everyone in every walk of life makes mistakes. Such are the perils of being a goalkeeper; those mistakes are magnified and are usually punished.

The stadium was stunned, Kerry fans rejoiced, they knew this was a huge moment. There was still time for a comeback but a goal at that stage, in a tight, dour contest was massive. As it turned out, it decided the All Ireland.

Durcan was rattled and his next few kick outs went straight down the middle, he wasn’t going to chance anything other than a long punt. This led to fifty-fifty ball being contested and each time Kerry won possession it was another chance gone for Donegal to eat into the lead.

There was one last chance with that frantic scramble at the death as the ball came off the post instead of finding the net and salvaging a replay. That was that.

Nobody from Donegal knew what to do after an All Ireland defeat as it hadn’t happened before; so people ended up doing the same as they did two years ago and had the craic. It was gone after five a.m. this morning in Donegal’s home from home on Harcourt Street, Dtwo, when Jimmy’s Winning Matches was played three times in a row and it was belted out with gusto and pride just as it always is – legendary man, legendary support.

Some of the players joined the fun too and mingled with the faithful and the main thing now that will be on their minds and all of ours is will Jimmy be winning matches next year?

His four year plan is complete, will there be a fifth? Will the great progress made by the minor team under Declan Bonner’s tutelage entice Jim to stay on, knowing that there is quality in that squad that could make the step up to senior?

We don’t know when these questions will be answered but obviously we’re all hoping for a yes.

Donegal will be back – and hopefully Jim will too.