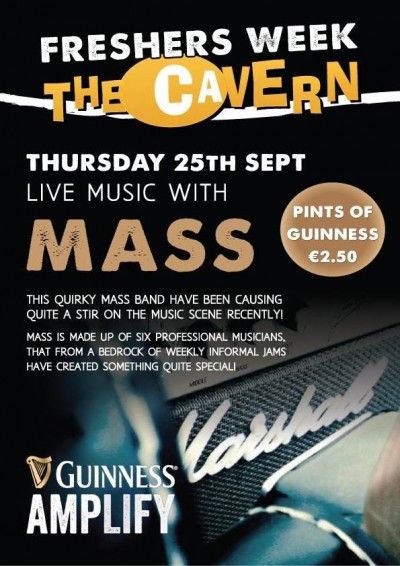 THE CAVERN BAR TO CELEBRATE ‘MASS’ THIS THURSDAY

The Cavern Bar are getting ready to celebrate ‘Mass’ this Thursday as a direct replacement for the now defunct Arthur’s Day.

The hugely popular Arthur’s Day has now been scrapped and replaced with Guinness amplify.

However pubs all across the country are attempting to re-invent Arthur’s day with a clever new initiative.

That’s why the popular Letterkenny bar The Cavern has decided to have some Mass.

But don’t worry, there won’t be any clerical figures running around as it’s the hugely popular band Mass that will be playing.

Mass is made up of six professional musicians and the combination of their talents make it a musical performance not to be missed!

Pints of Guinness will also be €2.50 throughout the day, so make sure and get yourself down to the Cavern Bar on Thursday and enjoy some MASS!!

THE CAVERN BAR TO CELEBRATE ‘MASS’ THIS THURSDAY was last modified: September 24th, 2014 by Mark Forker