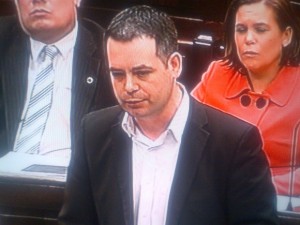 Introducing the Central Bank and Financial Services Authority of Ireland (Amendment) Bill 2014 Deputy Doherty said: “This Bill is a package of amendments aimed at redressing the imbalance in favour of the consumer.

“It aims to make access to justice for the consumer accessible, timely and affordable. My office is often inundated with calls from citizens unable to get justice when dealing with a financial institution. This Bill will go some way to giving them a fighting chance.

“At a time when bailed out banks are sending thousands of legal letters to struggling homeowners it is more important than ever that consumer’s rights are protected and enhanced.

“Working with the Free Legal Advice Centre I have drafted this Bill to strengthen the hand of the person in the street dealing with his or her bank of financial institution.”

Doherty says his Bill makes justice more accessible by allowing consumers make a complaint within two years of becoming aware of an issue rather than the current blanket six year rule.

“It will force the banks to give convincing reason for not engaging in mediation and crucially allows for an appeal to the Circuit Court rather than the High Court. This change alone will allow for a greater right to appeal for consumers,” he added.