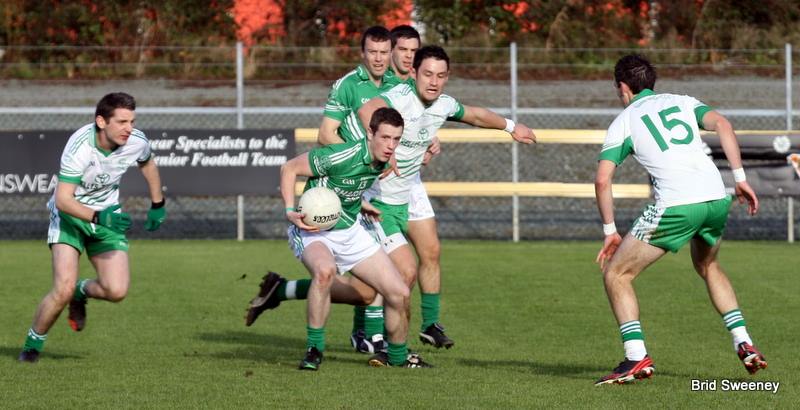 Shaun ‘the yank’ Boyle is back from the States and is ready to fire Naomh Muire to victory over Naomh Conaill in the Donegal SFC.

Naomh Muire return to Senior championship action for the first time since 2000 when they host Naomh Conaill in the Donegal SFC on Saturday evening.

The Lower Rosses club won the Intermediate championship in convincing fashion last year, and in doing so booked a ticket to Donegal football’s top table for the first time in almost twenty years.

Naomh Muire have made massive progress on and off the pitch and boast fantastic facilities that are the envy of many clubs across the county.

On Saturday they return to the Donegal SFC action when they entertain Naomh Conaill.

Naomh Muire have enjoyed a good league campaign in Division Two, especially when you consider they’ve played the majority of their matches without star players Shaun ‘the yank’ Boyle, Adi O’Gara, Owen Grant and Darragh White who all departed to the USA for the summer.

Naomh Conaill last won the Donegal SFC in 2010, and in the same year reached the Ulster final were they were narrowly defeated by Crossmaglen.

They were also defeated by St.Eunan’s in the county decider in 2012.

They have the players at their disposal to win another Senior championship and will be boosted by the return of Donegal players Leo McLoone, Anthony Thompson, Leon Thompson and Dermot ‘the brick’ Molloy.

It will be a formidable test for Naomh Muire, but they’ll lack no motivation for Saturday’s encounter.

Naomh Conaill will be itching to avoid a repeat of last season in which they exited the championship at the group stages.

They’ll be hoping to go all the way this year and will believe they have the ability to do so.

The Banks is a formidable place for any team to go, but Naomh Conaill’s greater experience at this level should give them the edge.