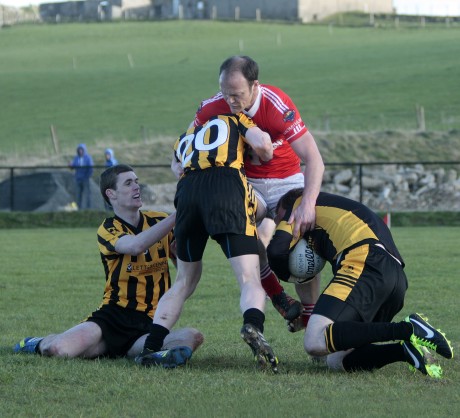 Colm McFadden will be hoping he can fire St Michael’s to victory against Bundoran in the Donegal SFC this weekend.

St Michael’s welcome Bundoran to The Bridge on Saturday evening in their opening group game of this year’s 2014 Donegal SFC.

St Michael’s have had a mixed bag of results all year in the All-County League Division One, but on their day are as good as any team in Donegal.

St Michael’s can boast the services of county stars Martin McElhinney, Colm McFadden and Christy Toye and reached the county final in 2011.

They were narrowly defeated that year by a Michael Murphy inspired Glenswilly side.

Since that county final appearance St Michael’s have failed to build on the expectation to would land a county championship.

Four Masters knocked them out at the quarter-final stage in 2012 and last year they failed to get out of the group stages having failed to win a single match.

However, there’s no doubting that on their day they’re capable of beating anyone in Donegal and are many pundits dark horses for this year’s championship.

Bundoran have had a solid campaign in Division Two so far this year, and will approach this game with confidence having drawn with St Michael’s in the championship last season.

They’re a tough, well organised physical side and they’ll believe they can get a positive result.

With home advantage and a quality squad, it’s a game St Michael’s should win.

With formidable away games to come against Kilcar and Glenswilly, it’s essential they get off to a winning start.