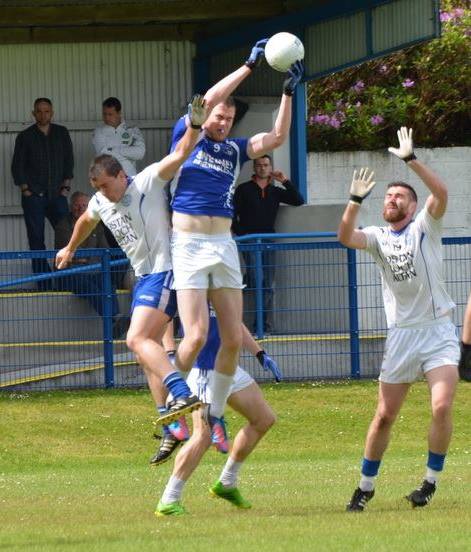 Midfield powerhouse Michael Sweeney will be a pivotal player for Fanad Gaels this weekend even though he wears pink boots!!

Gaeil Fhánada host Naomh Bríd this weekend in the All Sports Intermediate Championship.

Gaeil Fhánada are one of the favourites to win this year’s championship and have enjoyed a solid league campaign so far this season.

They’ll look to Michael Sweeney, Seami Friel and Paddy McConigley for inspiration and with home advantage should have enough quality to overcome Naomh Bríd.

Naomh Bríd will have county star David Walsh back in their line-up and he will be a key component for them as they seek to secure a crucial away victory.

Last year’s beaten finalists St Naul’s will be hoping they can go one better this year after their heart-breaking defeat to Naomh Muire in last year’s decider.

Sharpshooter Stephen Griffin is a lethal forward for St Naul’s and Naomh Colmcille will have to formulate a plan to stop him if they’re to have any chance of winning.

Matthew Crossan has enjoyed a good season for Naomh Colmcille and is an expert from dead balls.

However, with more experience and more strength and depth in their squad, plus home advantage it’s hard to see past St Naul’s.

Naomh Columba hit the headlines earlier in the year for famously helping a Galway man turn turf while they were returning from a match at the All-Ireland Gaeltacht championships earlier this season.

Their wonderful gesture received national coverage and attention from all over the country.

However, on Sunday they’ll be hoping to make the headlines for footballing reasons.

Carndonagh have home advantage and are a tough, well-organised outfit, but Naomh Columba have enjoyed a good league season so far this year, and have great pedigree when it comes to club championship football.

Naomh Columba won a number of Donegal SFC titles in the late 80’s and 90’s, and they should have enough to get over the line.

Junior Champions Milford make the step up to the Intermediate bracket following their stunning season last year, but face a tough test in the form of Buncrana.

Buncrana competed in the Donegal SFC up until a few seasons back and have aspirations to return to top level football.

County star Darrach ‘Jigger’ O’Connor will be a key man for Buncrana and Milford will need to devise a plan to cut out the supply to the tricky and skilful corner forward.

Milford will be keen to make an impression and with home advantage will be a tricky proposition for Buncrana.

However, Buncrana are an experienced side and should have enough quality to see them defeat the Milford men.

Downings have struggled badly since making the step-up to Division Two and are low on confidence having suffered some heavy defeats.

Aodh Ruadh on the other hand have enjoyed a good league campaign and are in contention for promotion.

They were defeated at the semi-final stage last year and have aspirations of going all the way this year.

With home advantage it’s hard to see past anything other than an Aodh Ruadh victory.