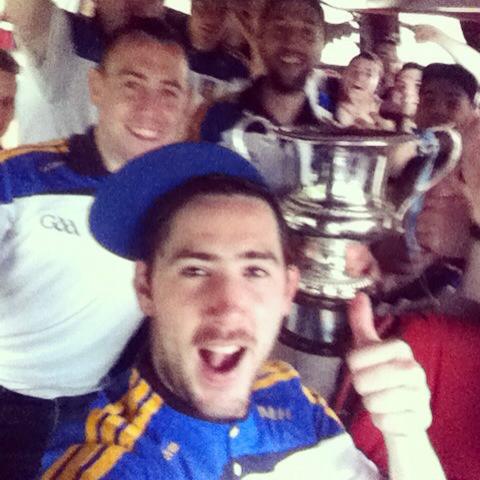 Kilcar captain Mark McHugh celebrates earlier this season when Kilcar won the All-Ireland Gaeltacht title, he’ll be hoping he gets his hands on the Dr Maguire later next month.

The clash between current Donegal SFC champions Glenswilly and Kilcar is without doubt the most intriguing match down for decision this weekend.

Glenswilly narrowly defeated Kilcar at the quarter-final stage of the championship last year, after both sides progressed from the same group.

There was annoyance expressed from both clubs last season, when despite the fact they played each other in the group stages, they met again at the quarter-final stage.

That won’t happen this year as the county board have decided that teams who faced each other in the groups will be kept apart in the last eight.

Glenswilly had a fantastic season last year, after their championship success they embarked on a fairy-tale run in the Ulster SFC, reaching the final before being defeated by a strong Ballinderry side.

Kilcar have had a fantastic season and currently sit top of the All-County League Division One table.

They also landed the All-Ireland Gaeltacht title earlier in the year.

They’ve been knocking at the door for a number of years, and many feel they’re primed to end their drought and win the Donegal SFC this season.

A quick look at their squad and you can see the quality they possess in their ranks.

Patrick McBrearty, Stephen McBrearty, Mark McHugh, Ryan McHugh, Eoin McHugh, Michael Hegarty, Ashley Carr and Ciaran McGinley are all top players who will have a big bearing on whether or not Kilcar will be successful this season.

Glenswilly will again look to Michael Murphy and Neil Gallagher for inspiration, but they’ll be ably assisted by Gary McFadden, Ciaran Bonner and Caolan Kelly.

It promises to be a cracking match and with home advantage Glenswilly will be fancied.

However, Kilcar have a great squad and players desperate for success, and have enough quality to go to Glenswilly and win.