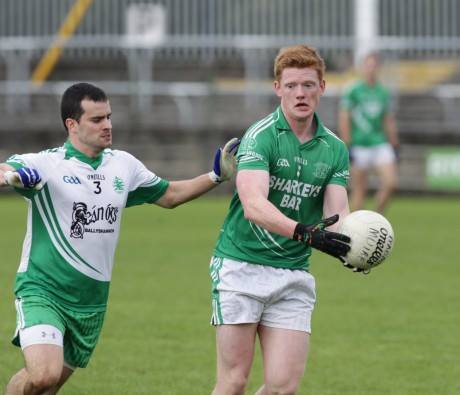 Paul ‘The Yank’ Boyle was sent off as Naomh Muire were narrowly defeated on their return to the Donegal SFC against Naomh Conaill.

Naomh Muire returned to senior championship action for the first time since 2000 and gave a great account of themselves pushing Naomh Conaill all the way in their Donegal SFC clash at The Banks.

Naomh Muire won the Intermediate championship last season and in doing so ensured a return to senior championship football.

However, Naomh Conaill were expected to power past the challenge of the men from the Lower Rosses, but that didn’t materialize as a young Naomh Muire side delivered an accomplished performance.

Naomh Conaill in truth were glad to hear the final whistle in the end up as 14 man Naomh Muire rallied late on with a succession of scores.

In what was an absolutely bruising championship game, scores were hard to come by in the opening half.

Dara White scored a couple of lovely points in the opening period, but a spate of points from Dermot Molloy and Dara Gallagher gave Naomh Conaill a three point advantage at the break.

The second-half followed a similar theme to the first, it was physical, and there were bruising challenges exchanged by both sides all over the pitch.

However, Naomh Muire were dealt a hammer blow ten minutes into the second-half when Paul ‘The Yank’ Boyle was sent off.

The talismanic captain is a crucial player for Naomh Muire, and Naomh Conaill used that one man advantage to stretch their lead out to six midway through the second half.

Naomh Conaill looked like they would cruise to victory, but a spirited fight-back from Naomh Muire almost earned them a draw.

Two cracking scores from Padraig McCafferty reduced the deficit to four 0-12 to 0-08.

Then scores from Shaun ‘The Yank’ Boyle and Harry Harden reduced the arrears to just two with a few minutes left.

Naomh Muire continued to put Naomh Conaill on the back foot, but the Glenties men showed their experience at this level, and just managed to get over the line.

They’ll be delighted with the win, but they were made to fight for it by a spirited, well-organised and determined Naomh Muire side.

Next up for Naomh Muire is St. Eunans in O’Donnell Park, but they’ll look forward to that challenge after proving they can hold their own with the best in the Donegal SFC.

Naomh Conaill now face Malin in their next Donegal SFC fixture next weekend.