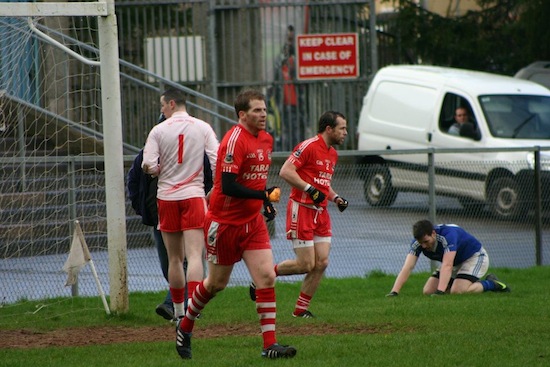 Killybegs earned a draw against Gaoth Dobhair thanks to a late score from Brendan McGuire.

Killybegs just love championship football, they’ve struggled all year in the league, but tonight they delivered an excellent performance to earn a well-deserved draw against Gaoth Dobhair.

A late point from the lively Brendan McGuire ensured Killybegs earned a share of the spoils.

Gaoth Dobhair were hot favourites coming into this fixture, in contrast Killybegs have been decimated by emigration and have really struggled in Division Two this season.

However, as the old saying goes, form counts for nothing when championship comes round, and so it proved to be.

Killybegs took the game to Gaoth Dobhair early on and Hugh McFadden and Brendan McGuire excelled for the hosts.

Points from Hugh McFadden, Brendan Boyle and McGuire gave them a good early platform to build on and when the fisherman netted midway through the first-half, they were in the driving seat.

Gaoth Dobhair rallied and reeled off three points, and went in at the break trailing by three points.

Scores were hard to come by, Gaoth Dobhair registered two points in the second half to get within a point, but a Hugh McFadden free stretched it back out to two.

However, there was late drama, Gaoth Dobhair netted with a few minutes to go to lead by a point and it looked like they’d snatched an unlikely victory.

But up stepped McGuire, who was a thorn in the Gaoth Dobhair defence all day to level the game.