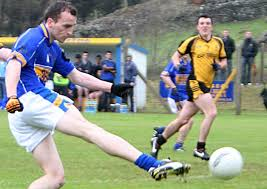 Kilcar have issued a real statement of intent after they recorded an excellent away victory against current Donegal SFC holders Glenswilly.

In what was a tough, physical and absorbing championship encounter it was Kilcar who managed to eventually come out on top.

The game was a low scoring affair, but it was an absorbing contest played at huge intensity throughout, the large crowd in attendance certainly got their money’s worth.

It was Glenswilly who started the brighter and they raced into a three point lead after fifteen minutes.

Glenswilly’s stand-in goalkeeper Gerard McGrenra had a fine performance for his side. Pic by North West Newspix.

It took Kilcar seventeen minutes to register their opening score through Mark Sweeney.

It was a great goal opportunity for Sweeney but he blasted his effort over the bar.

Glenswilly were dealt a hammer blow midway through the opening half when goalkeeper Phillip O’Donnell was forced off through injury.

With no recognized goalkeeper on the bench, it was left to club stalwart Gerard McGrenara to deputize for the injured O’Donnell.

It ended all level at three points apiece at half-time.

Kilcar raced into an early second-half lead when Ciaran McGinley pointed, but Michael Murphy quickly hit back to level.

Kilcar then reeled off three unanswered scores to get a real foothold in the game.

Patrick McBrearty, Conor Doherty and Ciaran McGinley all fired over to give Kilcar a three point lead.

Glenswilly hit back with scores from Gary McFadden and Caolan McFadden, but scores from McBrearty and Eoin McHugh stretched their lead back out to three points.

Glenswilly tried gamely to get back into it, and Neil Gallagher had a goal effort flash just wide.

But Kilcar held on for a famous win, and their performance has backed up why their the bookmakers favourites to win the Donegal SFC.

Glenswilly will look to get their campaign back on track next weekend in Bundoran.

Next up for Kilcar is St. Michaels in Towney next weekend, and the winner of that match would be guaranteed a place in the last eight, it should be a cracking encounter.