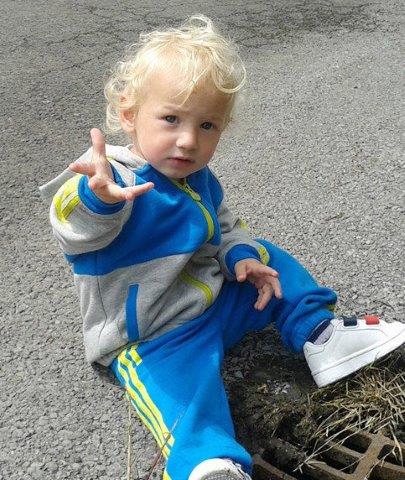 GRANDAD: WE HAVE NO BAD FEELINGS TOWARDS DRIVER WHO KNOCKED DOWN JOSHUA

The grandfather of toddler Joshua Coyle says he holds nothing against the man who killed his grandson.

Tragic Joshua Coyle who was killed on Friday.

Heartbroken Alan Coyle told Donegal Daily his family understand the pain the man is going through and want him to come to little Joshua’s funeral.

The 22 months old toddler died after he was struck by a van at his home at Crieve Glebe, Letterkenny at 6.45pm on Friday evening.

Alan, 60, revealed the driver is a friend of the family and that Joshua and his brothers were excited by his arrival.

“They would have been excited as he often brought them sweets. He’s a close friend of the family for as long as I can remember.

“It was a complete accident and we hold no ill will against this man. He is suffering his own pain too.

“He is part of the grieving process and we hope very much that he will attend little Joshua’s funeral,” said Alan.

He also revealed that the dead boy’s older brother Alexander, 4, was only feet from the van when it struck Joshua.

“He saw it all and we are trying to help him now. I don’t want to think about what could have happened if he was any closer,” he added.

Alan described Joshua as a beautiful child who was beginning to leave his baby years behind him.

“He was starting to become a little boy and he was starting to leave his baby years behind him. He was full of life and was beginning to play with his older brother Alexander’s toys including his little battery car.

“It’s just so sad. The whole family is just devastated but we are a very close family. Joshua’s mum and dad Suzanna and Alex are his three brothers Alexander, Rohan and Sean are trying their best to cope.

“But we’re here for them and they know they are not alone,” he added.

Alan paid tribute to the Gardai and to the staff of Letterkenny General Hospital where little Joshua passed away on Friday evening.

“I can’t say enough good things about these people. The Gardai were as professional as anybody could ask for.

“And the staff in the hospital from the porters, to the nurses to the doctors tried to make us feel as comfortable as we could in the circumstances. We just want to thank them all,” he said.

A full investigation has been carried out into Joshua’s death by a team of Garda Forensics experts.

A post mortem was also carried out on Joshua at Letterkenny General Hospital on Saturday afternoon and his remains were then taken to the family home to be waked.

Large number of mourners have already been attending the home which is located in a quiet country area on the outskirts of Letterkenny.

Joshua will be buried at Conwal Graveyard in Letterkenny after midday funeral mass at St. Eunan’s Cathedral on Tuesday.

GRANDAD: WE HAVE NO BAD FEELINGS TOWARDS DRIVER WHO KNOCKED DOWN JOSHUA was last modified: September 29th, 2014 by Stephen Maguire