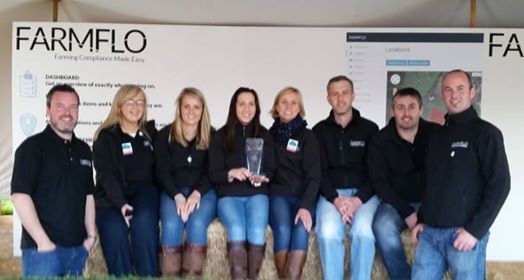 Farmflo, a Letterkenny based company was named best New Agri Software Start-up at the Innovation Awards ceremony in Ratheniska, Co. Laois, where the 2014 National Ploughing Championships were taking place.

The award recognises and rewards Irish start-ups for their success in innovate agriculture business.

The award was presented to Farmflo by the Minister for Enterprise and Employment Richard Bruton, Editor of the Farmers Journal and Anna May Mc Hugh Managing Director of the National Ploughing Championships.

Farmflo was shortlisted from over 80 entrants to win a position in the Innovation Arena among 30 of the top Irish most innovative companies.

It was a roaring success with thousands of visitors checking out the 30 new innovative companies on show over the 3 days.

Speaking about the award, Farmflo’s CEO Jason Devenney told Donegal Daily, “It was a complete shock as we did not think we would win, when our name was called out as the most innovate start-up in agriculture we were delighted.

“It is a great sign that we are on the right track with our mission to reduce the worry and stress of compliance for farmers and we are equally proud to be doing this in Donegal.

Junior Minister for Business and Employment TD Gerald Nash took time out of his busy schedule to visit the Farmflo stand, where he congratulated the team on winning the award.

Commenting on the award Gerald Nash TD said, “Technology has a huge role to play in farming and Farmflo should be seen as a very positive development for farmers who can use it to their advantage and save up to 20 hours per month whilst making compliance easier.

On top of winning this award, Farmflo launched there Herd Management application and enjoyed meeting with both new and existing customers in person and demonstrating Farmflo’s capabilities,” says Gareth Devenney, COO at Farmflo.

Farmflo would like to congratulate the Donegal winners of the ploughing categories who participated at the National Ploughing Championships 2014 Lee Simms, Gary Simms, Evan McGirr, Kieran McDaid, Kathleen Donaghey and Tina McMenamin.

Farmflo would also like to congratulate William Morrow from Demense, Raphoe, Co. Donegal for winning the Dairy Calf to Beef Category in the Origin Green Beef Sustainability Awards, organised by Bord Bia, in conjunction with the Irish Farmers Journal and Teagasc, that were presented on the second day of the National Ploughing Championship.

Farmflo’s applications have been designed by famers for farmers, according to the company and almost all Farmflo’s employees are from farming backgrounds and understand the importance of compliance and the farmer’s needs.

Farmflo are excited to be bringing such employment potential to Donegal as more jobs will be coming on stream within the coming months.

If you are a farmer and are worried about compliance you can try Farmflo’s software for free for the first month by signing up through our website www.farmflo.com