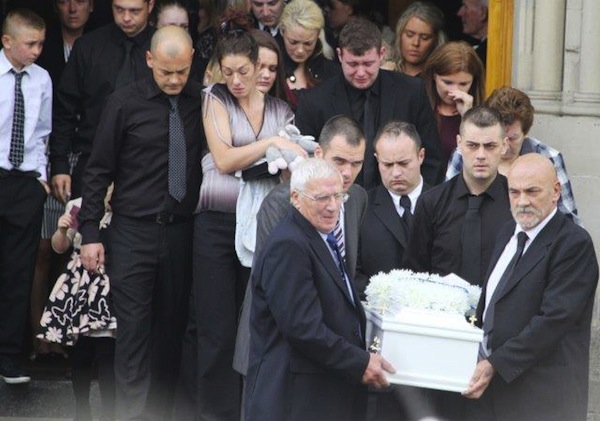 HEARTBREAKING SCENES AS LITTLE JOSHUA IS LAID TO REST

A young couple made their most heartbreaking journey today as they carried the remains of their youngest son into his funeral mass.

Little Joshua died after he was struck by a van at his home at Crieve Glebe, Letterkenny on Friday evening.

Tragic Joshua Coyle who was killed on Friday.

Mourners wiped back tears as the mass heard of the love the little blonde toddler had given his parents and brothers in his short life.

Devastated mum Suzanna fought back tears as she told Joshua “The day you came into our lives was the happiest day of our life. Look down on us and keep us safe.”

It was even more poignant for Fr Flood for he had christened little Joshua in the same church just 18 months ago.

Fr Eamon Kelly said he wanted to thank each and every person who had come to the funeral mass and who had supported the family in recent days.

“Even though we do not how to grieve or what words to say, your very presence, your very effort is very important for Alex and Suzanna, Alexander, Sean and Rohan,” he said.

There were further emotional scenes as Joshua was laid to rest at nearby Conwal Graveyard.