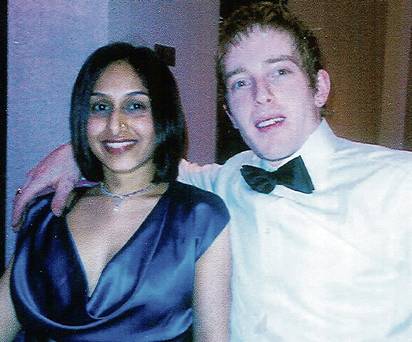 Dhara with her husband Michael

A LEADING expert has criticised the lack of resources in Donegal and Sligo after the death of a mother days after giving birth to her first child.

Dhara Kivlehan, who was 28 and originally from India, died in September 2010.

A jury in Leitrim last night returned a verdict of medical misadventure in the case.

The HSE had asked for a verdict of death by natural causes.

Independent expert Dr Peter Boylan, from the National Maternity Hospital in Dublin, told the inquest that Mrs Kivlehan should have been seen immediately after she gave birth to her son Dior by both renal (kidney) and liver consultants.

However she was not see by the renal expert – Dr Austin Stack – until more than two days after she gave birth by caesarian section at Sligo Regional Hospital.

The system, he said, was broken.

He said the fact Dr Stack worked between Sligo Regional Hospital and Letterkenny General Hospital was a major factor in the case.

“This is not to lay blame at any staff at all,” said Dr Boylan.

“Renal and liver consultants should be available at both hospitals and not one between the two but this is a problem we have had in this country for years.”

In his report to the coroner’s inquest in Carrick on Shannon, Dr Boylan stated: “Having reviewed the medical notes from Sligo and Belfast and having read the statements provided to the inquest by those involved in Mrs Kivlehan’s care, it is clear to me that there were deficiencies both in her clinical care and at a systematic level.”

He said deficits in clinical care included the attribution of all of Dhara’s medical problems to HELLP syndrome, a severe form of pre-eclampsia, when she was in fact suffering from internal bleeding and in desperate need of medical attention of both renal and liver specialists.

Dhara became progressively worse and wasn’t seen by Dr Stack until 60 hours later on the afternoon of September 24.

She was transferred to Belfast later that night and died at the Royal Victoria Hospital on September 28.

MUM WHO DIED AFTER GIVING BIRTH COULDN’T SEE EXPERT BECAUSE HE WAS IN LETTERKENNY was last modified: September 30th, 2014 by John2