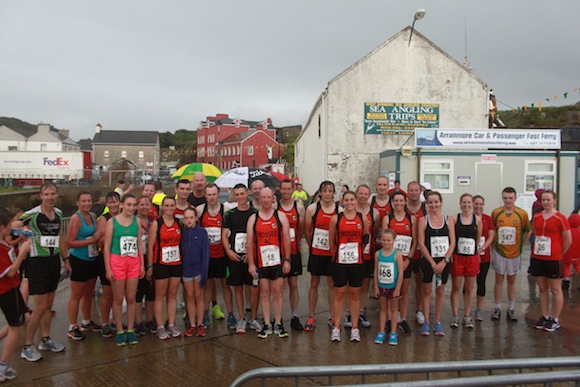 This Sunday will see the Cross Country season kick off with the first event being hosted by our own club.

The Donegal Donegal Cross Country Even Ages and Masters Championships will take place in Maghergallen, Gweedore this Sunday 5th October.

Action will get underway that day at 12 noon with Ladies Masters race followed by the mens race at 12:20.

As our club is hosting it would be appreciated if as many parents and anybody interested was there on the day to provide support and help.

The results, where a fantastic turnout of 338 children for a well organised event, were an unexpected and narrow victory for Acres NS, Burtonport in the Primary Schools cross country in Carrickfinn today in the 4/5 teacher category by one point from Scoil Mhuire, Doire Beaga and Scoil Naomh Dúigh, Anagaire in joint second.

Scoil Chróine, Dungloe were winners of the large school category and had impressive individual winners in Clare Diver, Girls U-9; Emily Colangelo, Girls U-11 and Oran Wallace, Boys U-13. Leah Mc Garvey, Scoil Phádraig, Dobhar was the winner of the Girls U-13 race.

Well done to Fiona Mc Ginley who was 1st Lady finisher in the Mooathon 10K in Downings last Sunday.

Cross country training continues for all adults in Mullaghderg every Wednesday and Friday at 6. Club captain Michael Mc Elroy in charge.

There is a group of athletes training in Gweedore each week which are focus mainly on marathon training towards Dublin but open to anybody in getting some distance training done.

This group are meeting Wednesday and Fridays at 7pm at Euroflex, Gweedore Industrial Estate. There are different distances and paces to suit all.

Anyone training for a Half Marathon or Marathon is welcome to come along.