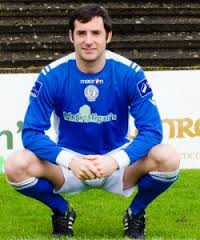 Gareth Harkin is relishing the prospect of facing St Pat’s in the FAI cup semi-final on Sunday.

Harkin returned from a two-year stint in Australia in December and was snapped up by Ollie Horgan in January.

The former Derry City and Coleraine midfielder has been in sensational form of late, and scored in their quarter-final victory over Avondale a fortnight ago.

He will be a key man for Ollie Horgan on Sunday, as Harps attempt to overcome the formidable test of the current League champions on their home patch and book a place in the FAI Cup final.

Harkin told Donegal Daily, “It’s obviously a tough tie, and we’re under no illusions as to how difficult it will be for us, but we’re confident we can compete with them.

“We’ve got quite a bit of experience in the squad, and everybody is really looking forward to the match.

“It’s a cup semi-final, live on TV, and if you’ve got an opportunity to potentially play at the Aviva, it’s what every player in this league strives for.

Harkin admitted that St Pat’s have a hugely talented squad, but believes have the defensive capabilities to withstand the attacking threat possessed by Pat’s.

“I think we’re really strong defensively, and we’ve got a really good shape about us, and we’re hard to play against.

“Granted this will be the toughest game we’ve played this season, but we all can’t wait for it and there’s a great buzz about the place.

Harkin was cautious when asked to predict the outcome on Sunday, but says his side are confident they can get a result.

“Look as I said we know it’s going to be extremely tough, but we’re well organised and we will be well prepared for it, if we can stay tight defensively and stay in the game who knows.

“It’s a cup game and anything can happen, we’re confident if we do the rights things and work our socks off, we might surprise a few people.

Harkin was instrumental for Harps in their victory over Shelbourne last Friday and will be an important player for Harps on Sunday.