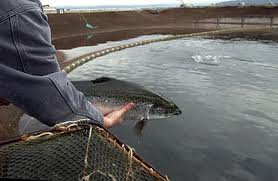 A NATURAL phenomenon has forced Fanad’s Marine Harvest to delay its salmon processing, which will have an impact on working hours there for its staff, the company has said.

Processing of salmon was due to take place in January but an increase in plankton in Mulroy Bay has hit the fish. It will now be delayed until March, but even then at a reduced level for six months.

In a statement to the Tirconnaill Tribune, a Marine Harvest spokesman said staff had been informed of the move.

“Primary processing will commence on March 1 on reduced volumes, with full production volumes resuming on August 1 and continuing for the rest of the year.

“Stocks that were intended for harvest in January/February have been impacted by gill damage resulting from large volumes of plankton reducing available oxygen levels in the bay.”

Managing Director Jan Feenstra said: “Unfortunately aquaculture, like all farming, is reliant to some extent on mother nature. This natural occurrence prevents us from keeping this stock until January/February which was our plan.

“The ceasing of the processing is a very regrettable yet temporary measure and we will work closely with all our staff to minimise impact on their employment, and where there is an impact, get them back to normal working conditions as quickly as possible.”