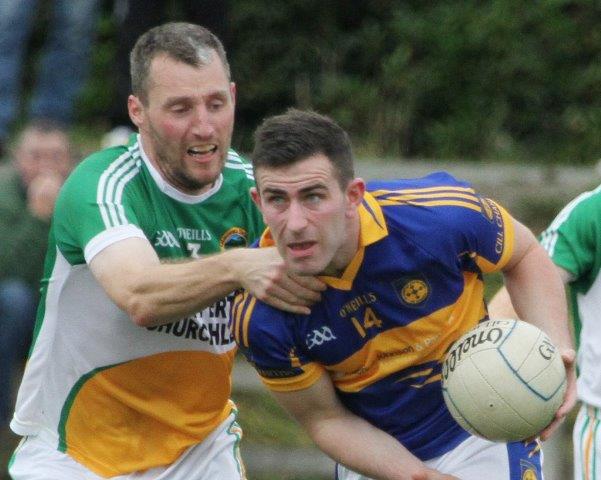 Paddy McBrearty will be hoping he can fire Kilcar to victory against St Michaels on Sunday.

Kilcar are in buoyant mood after their fantastic opening day victory over Glenswilly in Foxhall and they welcome St Michaels to Towney this weekend in what promises to be another championship cracker.

Kilcar earned a hard fought win over current Donegal SFC holders Glenswilly, but they were full value for their win.

St Michaels on the other hand recorded a comprehensive and comfortable win over Bundoran.

A brace of goals from Colm McFadden and strikes from Christy Toye and Michael Langan ensured an easy win for Tony Wilkinson’s side.

However, this Sunday represents a totally different proposition for St Michaels, Towney is renowned for being a difficult venue for any away side to go to in search of a result, and Sunday will be no different.

Kilcar are the bookmakers favourite to win the championship outright, and they’ll be expected to defeat St Michaels and secure their passage to the last eight.

It’s going to be a close and hard fought game, but with home advantage Kilcar should have enough to win, but it will be close.

Both sides are in desperate need of a result, after both sides suffered opening day defeats in their respective championship matches last weekend.

Bundoran were hammered by a rampant St Michaels side, while reigning Donegal SFC holders Glenswilly were defeated at home to Kilcar.

Glenswilly travel to Bundoran this weekend, and Gary McDaid’s side need a win to stay in the championship.

Bundoran are a physically strong and well organised side, they’ll make it difficult for Glenswilly and have a good record at home, and they also need a win to keep their championship aspirations alive.

However, with Michael Murphy, Neil Gallagher and Ciaran Bonner in their side Glenswilly should have too much quality to get the win they badly need.

Gaoth Dobhair could only manage a draw last Saturday evening in Killybegs, and now their derby match with Dungloe takes on extra significance on Sunday afternoon.

Dungloe defeated Termon in Rosses Park, and have already won the Division Two title by going the entire season unbeaten.

Tony Boyle’s side are full of confidence, and with Adrian Sweeney rolling back the years with a virtuoso display last weekend, Dungloe have a great chance of destroying Gaoth Dobhair’s championship ambitions.

Kevin Cassidy’s side were denied a win last weekend, by a late Brendan McGuire point, but before Cassidy netted with five minutes to go, they’d trailed for the entire match.

County stars Neil McGee, Eamon McGee and Odhran MacNiallais will be key players for Gaoth Dobhair, and with home advantage they’ll be fancied by many to win against their local rivals Dungloe.

However, Dungloe are brimming with confidence and they’ll relish the challenge of facing Gaoth Dobhair in their own backyard.

Gaoth Dobhair struggled last week, and all the pressure is on them to get a result, they’ll need a big performance to overcome Dungloe.

Termon and Killybegs face off at the Burn Road this weekend in a crucial game for both sides, as they fight to keep their championship hopes alive.

Killybegs reached the Donegal SFC final last year, but have endured a difficult season in the league to date.

However, they’ll take confidence from their excellent performance against Gaoth Dobhair, and they’ll be delighted to take a point from the game.

Termon are rooted to the bottom of Division One and have been decimated by emigration and injuries this season.

They suffered another demoralising defeat to Dungloe last weekend, and they need to produce a big performance to get anything from Killybegs at the weekend.

Darren Gibson will look to sharpshooters Daire McDaid and Christy Connaghan to help them to a crucial win.

Maxi Curran’s side delivered a clinical display after surviving an early first-half scare when they conceded two early goals.

St Eunans composed themselves and drew level with the Inishowen men by half-time, before kicking on in the second-half scoring 1-10 without reply to blow Malin away.

Naomh Muire, competing in the senior championship for the first time in fourteen years, gave an excellent performance against Glenties.

They had Paul ‘The Yank’ Boyle red carded early in the second-half, but they scored four unanswered points to get without two of Glenties with five minutes to go.

Glenties survived the scare and were relived in the end to get over the line.

St Eunans are hot favourites on Sunday, but Gary Boyle will have side well prepared for the challenge presented by the Letterkenny men.

St Eunans should have too much quality and experience for Naomh Muire, and know a win will book a place in the last eight.

Naomh Conaill got their Donegal SFC campaign off to a winning start last weekend, but were made to work hard by a spirited Naomh Muire side.

Last year’s result against Malin ultimately cost the Glenties men dearly, they lead by seven points at half-time in the reverse fixture, but Malin fought back to earn a draw.

Naomh Conaill were eventually eliminated due to Malin having a better scoring difference than them after they inflicted Cloughaneely to a heavy defeat.

Naomh Conaill will be out to ensure that history doesn’t repeat itself this weekend as they seek to secure a passage into the last eight.

Malin gave St Eunans an early first-half fright, but lost their way in the second-half.

They face a hugely difficult game again this weekend, and it’s hard to look past Naomh Conaill for the win.

Ardara welcome Glenfin to Pearse Memorial Park this weekend hoping to secure a crucial after being held to a draw against Four Masters last weekend.

In truth, Ardara had chances to win the game against Four Masters but were wasteful and were left to rue those missed chances in the end.

They’ll be confident with home advantage to have enough to overcome the challenge of Glenfin.

Glenfin were left licking their wounds after being defeated by local rivals Mac Cumhaills last weekend.

It was nip and tuck for most of the match last week, but Mac Cumhaills kicked on in the final quarter and pulled away to win comfortably in the end.

It now leaves Glenfin in desperate need of result to keep their championship hopes alive, although they face a formidable test in the form of Ardara.

Mac Cumhaills earned an excellent derby win over Glenfin last weekend, and are hoping they can continue that this weekend when they host Four Masters.

With home advantage Mac Cumhaills will be confident they can build on last week’s success and a victory would see them advance to the last eight.

With Paul Durcan, Karl Lacey and Luke Keaney in their side, they’ll be confident they can go to Mac Cumhaill park and get a result.

It’s a crucial match for both, but Four Masters are desperate for a win and no nothing less than victory will do.