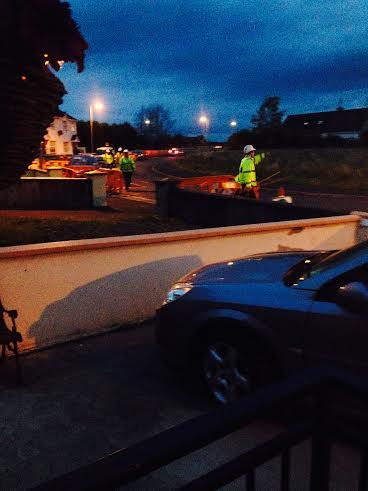 ANTI-water taxes campaigners say they will launch a series of ‘rolling pickets’ across Donegal as contractors began installing meters in several towns.

GMC Sierra – the Irish Water sub-contractor – has sent teams of men into Stranorlar, Lifford, Ballybofey and Donegal Town to instal meters outside homes.

There was a brief protest in Donegal Town, with Gardai on standby.

But there has been no serious trouble so far.

However Donegal Daily has been contacted by groups in Gaoth Dobhair and Inishowen who say they will stop meter installations in their areas.

The arrival of water meter contractors in the county has provoked a bitter debate online.

“I can’t believe people in Ballybofey are sitting watching this. Unbelievable,” wrote one Buncrana resident on social media.

A resident in Donegal Town wrote: “We stopped them. They’ll be back, and we’ll stop them again. We need to stand up to Enda Kenny now.”

However others – although much fewer in number – said there was nothing anyone can do about it.

“Get over it,” wrote one resident.

The residents groups in Inishowen and Gaoth Dobhair say they are prepared to travel to other parts of the county to stop water meters being put in.