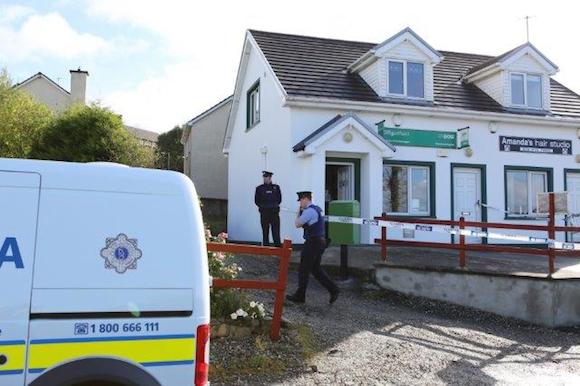 BREAKING NEWS: Gardai deployed a stinger device after eagle-eyed neighbours alerted them to a post office robbery at a Co Donegal post office.

The men, who were believed to be armed, demanded cash from terrified staff.

However while the gang were inside the premises, alert locals contacted Gardai while the postmistress also triggered her personal alarm.

Officers then swamped the area with patrol cars and other back-up.

A pursuit took place and Gardai placed along the border used a ‘stinger’ device to disable the van which eventually crashed into a ditch at Killea close to the Derry border.

Inspector Pat O’Donnell told Donegal Daily the arrest of the three men came at the end of what was a “very successful operation.”

“It helped that we had earlier been alerted to a postal van being stolen in Derry and we had officers along the border.

“When the robbery was carried out, we had members in place who were able to apprehend the suspects” he said.

The van used in the attempted robbery is believed to have been a Northern Ireland-based postal van stolen in Derry earlier today.

The three suspects were arrested with two taken to Letterkenny Garda station and the third to Buncrana where they are being questioned.

A quantity of euro currency was also recovered at the scene.

The post office has been robbed on a number of previous occasions.

A Garda spokesman said “This was the community and Gardai working together at their best.”

The successful operation is being put down to local vigilance and fast-moving Garda responses.

Local county councillor Paul Canning, who lives just a mile form the scene of the attempted robbery, was delighted with the arrests.

“It is great to see people power getting one over on these criminals.

“The Gardai can only do so much and we as a community must support them. This is the result – three men have been arrested after committing a crime,” he said.

Cllr Canning revealed that a delegation of local councillors recently met with local Garda Supt Michael Finan and h gave them assurances that he would try to increase manpower along the Donegal border.

“I think this has happened and it’s great to see a result like this. The Gardai need all our support,” he said.