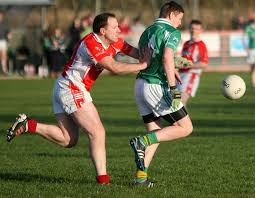 Adrian Sweeney was impressive for Dungloe again this afternoon, but he couldn’t halt his side being defeated by Gaoth Dobhair in the Donegal SFC.

Cian Mulligan’s goal on the stroke of half-time was the crucial score between Gaoth Dobhair and Dungloe at Magheragallon this afternoon.

Gaoth Dobhair came out on top in a physical bruising championship affair which enthralled the large crowd in attendance.

In truth it was game of two-halves as Gaoth Dobhair lead by six points at the break.

Kevin Cassidy’s men had the advantage of a strong breeze at their backs in the opeing period.

They had the lions share of possession but until Mulligan’s goal failed to hurt Dungloe on the scoreboard, as they’d only pointed four times at that stage.

Dungloe had their moments in the first-half with Adrian Hanlon forcing a wonderful stop from Christopher Sweeney.

But at half-time it looked ominous for Dungloe as they Gaoth Dobhair by six,but Tony Boyle knew his men had the advantage of thw wind in the second period.

But Gaoth Dobhair hit back through scores from Kevin Cassidy, Noel Kelly and Odhran MacNiallais to stretch their lead back to six.

However, Dungloe rallied back, Cory Gallagher rattled the crossbar when he powered through the Gaoth Dobhair defence and really ought to have scored.

Substitute Adam Neely, a member of the Donegal minor panel, scored two points and Adrian Sweeney added another to bring it back to a one score game again.

Dungloe pushed hard for an equalizer, but Gaoth Dobhair held firm to earn a crucial win.

Next up for Kevin Cassidy’s side is Termon, who sit bottom of the group, while Dungloe host Killybegs with the winner of that guaranteed to advance to the last eight of the Donegal SFC.