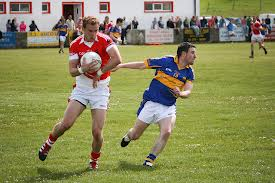 DONEGAL SFC: ST MICHAEL’S SENSATIONAL AS THEY POWER PAST KILCAR

Peter Witherow had an excellent game as St Michaels defeated Kilcar in the Donegal SFC.

Last weekend, Kilcar were tipped to go all the way following their win against current Donegal SFC holders Glenswilly, but that pendulum has now swung towards St Michael’s following their stunning win in Towney this afternoon.

In difficult blustery conditions, St Michaels had the advantage of the wind with them in the opening period.

But they adopted a blanket defence approach and invited Kilcar to try and break them down.

However, time after time, Kilcar were dispossessed by a superbly well organised St Michaels side who then clinically punished them on the counter-attack.

The speed at which Tony Wilkinson’s side broke at was particularly impressive, and two excellent scores from Colm McFadden and Liam Paul Ferry gave them an early two-point advantage.

Kilcar seemed content to keep possession of the ball in their own half and St Michaels patiently allowed them to have it.

They went over and back, and sideways with absolutely no urgency, much to annoyance of their home support who urged them to run at the St Michaels defence.

However, as soon as Kilcar crossed the half-way line they were engaged by the St Michaels defence who were brilliantly disciplined in the tackle and turned over possession on numerous occasions.

St Michaels added another two points before the break, first through an expertly taken free from Colm McFadden, then Daniel McLaughlin seized on a mistake from a short kick-out to put St Michaels four ahead at the break.

At half-time having failed to scored in the opening thirty minutes of play, the Kilcar support expected a second-half blitz from their side, but it never materialized.

With the advantage of a strong wind now at their backs Kilcar were time after time forced into errors by a St Michaels side who played at an unbelievable intensity.

It took St Michaels just three minutes to do what Kilcar couldn’t do in the opening half which was score a point!

Martin McElhinney powered through the Kilcar defence to fire over, and quickly after that Michael Langan was awarded a penalty by Seamus McGonagle after being dragged down as he went to pull the trigger.

Colm McFadden dispatched the penalty and St Michaels were in cruise control, as a shell-shocked Kilcar side looked around themselves stunned at what was unfolding before them.

Michael Gallagher added another score for St Michaels to put them nine ahead, before Kilcar finally registered a score from a free by Patrick McBrearty.

McBrearty added another free, but then St Michaels broke again at frightening speed, Andrew Kelly released Daniel McLaughlin who ran thirty metres before firing into the top corner of the Kilcar net.

It was a wonderful goal, and there was no way back for Kilcar after that, Ryan McHugh, Paddy McBrearty and Michael Hegarty added points for Kilcar.

But Daniel McLaughlin and Andrew Kelly also added points for St Michaels to run out utterly convincing and well deserved winners on a score-line of Kilcar 0-05 St Michaels 2-08.

St Michaels really were outstanding to a man, their decision making on the ball was almost faultless and the speed at which they transferred possession from defence into attack was sensational.

It’s hard to single out individuals for praise when so many St Michaels players performed well.

But the performances of brothers Ciaran and Michael Gallagher, Michael McGinley, Martin McElhinney and Colm McFadden were particularly eye catching.

Next up for St Michaels is a trip to Glenswilly which is a repeat of the 2011 decider.

Kilcar face Bundoran knowing nothing other than a win will do if their to make the last eight of the Donegal SFC.