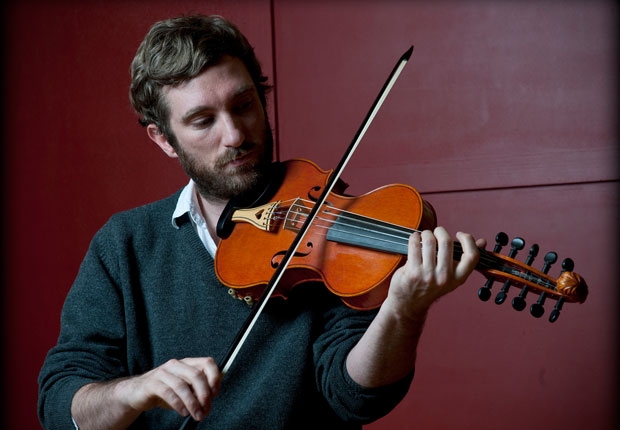 Gifted musician Caoimhín Ó Raghallaigh is to travel the length and breadth of Irish traditional music at the Regional Cultural Centre this Saturday night.

Dublin-born Ó Raghallaigh is to explore the beauty and humour of the music in ‘In My Mind – A Solo Fiddle & Film Show’ aided and abetted by his 10-string fiddle, a film projector and a host of virtual guests.

He describes the fiddle as “a stunning 10-string instrument made by Norwegian luthier Salve Håkedal. The top five bowed gut strings plus the five sympathetic strings below give the fiddle a wonderful resonant sound.

“It is somewhere between a hardanger fiddle and a viola d’amore. While Salve calls this instrument a 5+5, and Dan Trueman (for whom the first one was made) calls his a 5×5, I’ve decided mine likes being called a Hardanger d’Amore.”

Ó Raghallaigh is both an established solo artist and a member of several acclaimed ensembles, including The Gloaming and This is How We Fly.

He says his distinctive sound can be traced back to an early interest in uileann pipes and a love for the traditional music of Kerry and Clare.

Ó Raghallaigh and Dán Trueman’s new album, Laghdú, recently went straight in at No.1 in the iTunes Ireland Charts for Traditional Folk.

The virtual guests, whom he has filmed, include a musician, dancer, singer, poet and landscape, each of whom make the other half of a duet with a live Caoimhín.

This is his journey showing the depth and beauty of traditional Irish music.

In My Mind – A Solo Fiddle & Film Show at the Regional Cultural Centre, Letterkenny, Saturday, 8pm.

A JOURNEY INTO THE HEART OF IRISH TRADITIONAL MUSIC WITH CAOIMHÍN Ó RAGHALLAIGH was last modified: October 7th, 2014 by John2