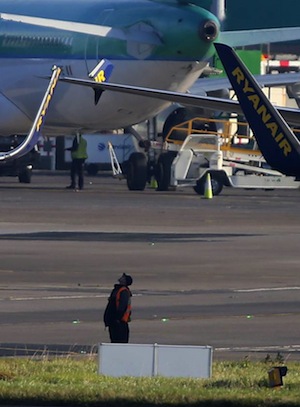 A Donegal woman has revealed her horror at the moment two Ryanair planes crashed into eachother at Dublin Airport this morning.

The scene of this morning’s plane crash at Dublin airport.

Joanne Holmes, from Letterkenny, was flying to Brussels as part of a cross-border renewable energy trip.

The Donegal County Council Ren-Net project official revealed how herself and seven others in her party got a shock when the plane next to them crashed into the side of their plane.

She told Donegal Daily “It was slightly funny in that one of our party was reading how safe Ryanair was to travel on and all of a sudden we heard this huge bang.

“I’m a nervous flyer at the best of times so you can imagine it was scary to say the least.

“We had to wait on the plane for ages until a bus came to collect us. You could see it all where the other wing clipped our plane,” she revealed.

She added that the scene of fire trucks and all the other emergency personnel was like something out of a film.

Joanne and her party were due to depart for Brussels at 6.20am but did not take of until 11am.

They were due to go directly to the Lorven Institute to take part in a ‘Best Practice’ seminar but the trip had to be rescheduled.

Joanne said she is slightly nervous about flying back later this week.

“It’s always going to be in the back of your head after what happened but at least I’m flying back with Aer Lingus,” she laughed.