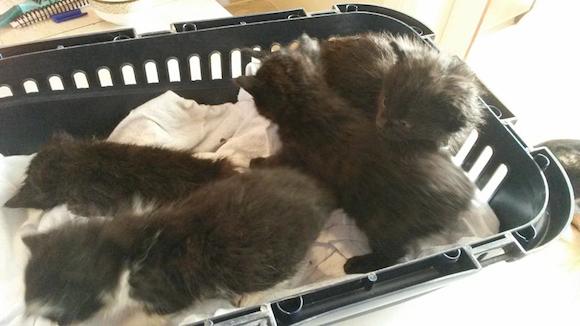 HOW CAN THEY DO IT? ANIMAL CHARITY’S ANGER AS 5 LITTERS OF KITTENS JUST DUMPED

“Kitten season has gone on really long this year and people out there seems unable to cope with the extra kittens and their way of dealing with them is very simple..off load the problem on to someone else,” said a Animals In Need spokeswoman.

“This week alone we had five full litters abandoned, two of them on other people’s property and the rest “just” dumped on deserted roads.

“The youngest litter is only about 3-4 weeks and unable to drink from a bowl. These were dumped on a doorstep in a box, covered in excrement.

“The man who found them, washed them and bought formula for them but they failed to drink and got very weak. By the time we got them one was very near dying, unable to swallow or move but with intensive care we got him turn around and he is now playing with his brothers and sister.”

HOW CAN THEY DO IT? ANIMAL CHARITY’S ANGER AS 5 LITTERS OF KITTENS JUST DUMPED was last modified: October 7th, 2014 by John2