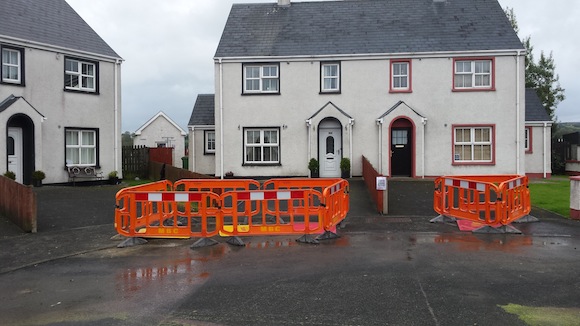 BLOCKING OF DRIVEWAYS BY IRISH WATER DESCRIBED AS ‘UNACCEPTABLE AND WRONG”

The blocked houses at Glenpatrick park in Ballybofey.

The actions of certain water contractors installing meters throughout the Finn Valley as being both ‘unacceptable’ and ‘utterly wrong’.

Residents from a housing estate in Ballybofey had their driveways blocked for almost three days as contractors erected barriers around their homes to install water meters ahead of the nationwide introduction of domestic water charges this January.

“I was contacted by a number of residents from the Glenpatrick Park estate in Ballybofey after they became concerned that the work being carried out by the contractors was causing a huge burden and disturbance to them and their families.”

“Residents contacted me on Monday when the workers originally arrived at the site to begin fitting the meters only to then erect a number of barriers to the front of a number of properties which were to remain there for the best part of three days – this is unacceptable.”

“What this has resulted in was the effective closure of the entrances into and out of people’s homes without any care nor consideration for the well-being of local residents – this is simply not good enough and the contractors involved need to understand that citizens here will not put up with this type of behaviour which – among other things – is utterly wrong.”

Elsewhere in the county, a number of groups from across Donegal have held local demonstrations and rallies against the roll-out of water charges with the first bills expected to be issued early next year.

The controversial new tax, which will see each household being directly charged for its own water usage, is strongly opposed by Sinn Féin, who insists the charge is yet another unnecessary stealth tax being imposed by central Government.

The state of the road after Irish Water left Glenpatrick Park estate.

Other residents on the estate have complained that they were left without water for up to two days while installing the meters.

Local man Michael McGrory took pictures of the meters and the condition of the road after the meters were installed.

BLOCKING OF DRIVEWAYS BY IRISH WATER DESCRIBED AS ‘UNACCEPTABLE AND WRONG” was last modified: October 9th, 2014 by Stephen Maguire