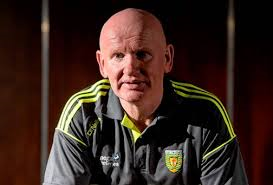 BONNER AND MCHUGH RULE THEMSELVES OUT OF CONTENTION FOR DONEGAL JOB

Declan Bonner will not be replacing Jim McGuinness as Donegal manager, and instead has reapplied for the minor position.

Declan Bonner and Martin McHugh have both ruled themselves out of contention for the vacant Donegal job following the departure of Jim McGuinness last week.

Bonner was regarded as strong favourite for the post, after leading the Donegal minors to the Ulster title after victory over Armagh.

Bonner also made history in his role as minor manager by guiding the county to their first ever All-Ireland minor final.

Like their senior counterparts they were narrowly beating by Kerry.

However, Bonner has opted out of throwing his hat in to the ring to take over the Donegal senior job.

Instead the Na Rossa clubman has reapplied for the minor job for next season.

McHugh also ruled himself out of contention, after it had been suggested in some quarters that he was interested in taking the job.

However, McHugh moved swiftly to deny his interest and said he wouldn’t be able to meet the demands required in terms of commitment.

McHugh recently got back involved in management, by taking charge of the Sligo IT side for the Sigerson Cup.

McHugh told The Irish Daily Star, “I think what happened was that I took the Sligo IT manager’s job and people were putting two and two together and getting five.

“The amount of time you have to dedicate is staggering.

“I just wouldn’t be able to make that kind of commitment.

Rory Gallagher is the firm favourite to replace McGuinness, and he would no doubt be a popular choice with the players, having worked with them from 2011-2013.

BONNER AND MCHUGH RULE THEMSELVES OUT OF CONTENTION FOR DONEGAL JOB was last modified: October 9th, 2014 by Stephen Maguire