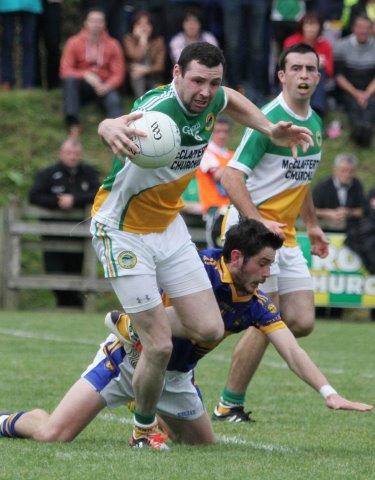 DONEGAL SFC PREVIEW: GLENSWILLY NEED A VICTORY OVER ST MICHAEL’S TO REMAIN IN THE CHAMPIONSHIP

Ciaran Bonner will be a pivotal player for Glenswilly this weekend, as they host St Michaels knowing nothing other than a victory will do if they’re to advance to the last eight of the Donegal SFC.

Glenswilly host St Michaels on Saturday evening at Foxhall, knowing nothing less than a victory will be good enough if they’re to advance to the last eight of the Donegal SFC.

St Michaels have won two from two, but they’re not guaranteed a place in the knock-out stages yet either.

However, if they were to be defeated by Glenswilly, Kilcar would need to beat Bundoran by over twenty points for Tony Wilkinson’s side to be eliminated.

St Michaels recorded excellent victories over Bundoran and Kilcar to sit top of the table after two games on four points.

Glenswilly stumbled to defeat in their opening Donegal SFC group game with Kilcar, but hammered Bundoran last week to swing back into contention.

A victory over St Michaels on Saturday evening would more than likely see Gary McDaid’s side advance along with St Michaels.

However, St Michaels are in fantastic form and their sensational win over Kilcar last weekend in Towney has now made them favourites for the Donegal SFC.

It was the manner of their performance which was particularly impressive, they were completely dominant throughout and Kilcar had no response to it.

Glenswilly will be fighting for their lives this weekend and will be cheered on by a passionate home support, but with St Michaels not guaranteed of a place in the last eight just yet, they’ll be going all out for victory.

If Tony Wilkinson’s side can repeat their performance of last weekend they’ll be hard to stop.

The game is on this Saturday evening in Foxhall and throw-in is at 5pm.

DONEGAL SFC PREVIEW: GLENSWILLY NEED A VICTORY OVER ST MICHAEL’S TO REMAIN IN THE CHAMPIONSHIP was last modified: October 9th, 2014 by Mark Forker